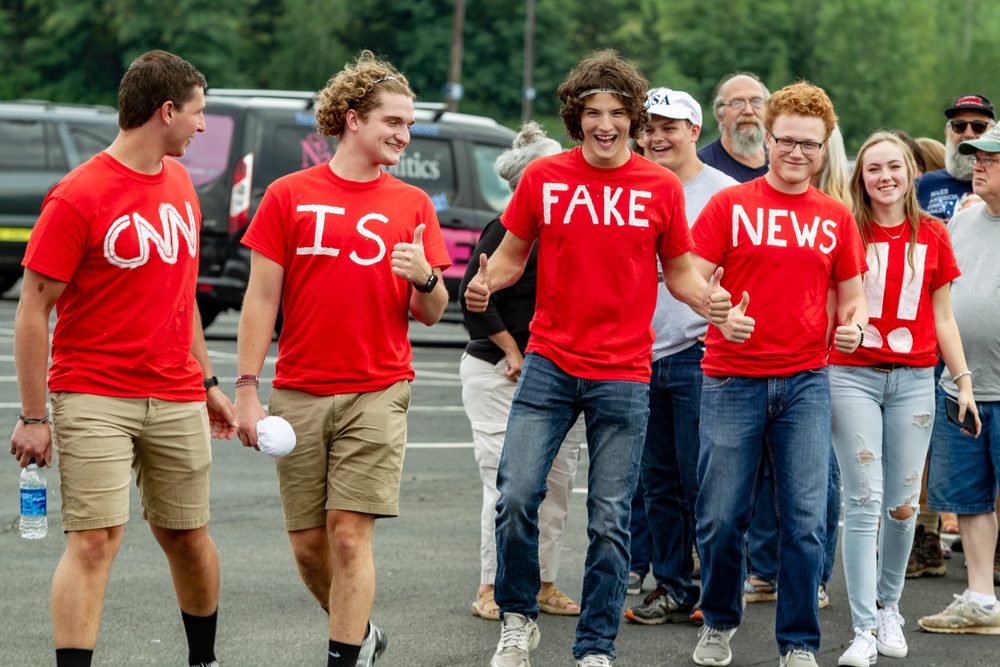 Something is rotten in the state of Denmark.

Hamlet’s evergreen is probably greener than ever, at least when it comes to mainstream media.

As a foreword: Project Veritas is not an honorable organization.

Its dubious methods (hidden cameras, video manipulation, honeytraps, dress ups, wiretaps and various tricks) have earned it some well-deserved criticism from both sides. Yes, including on the conservative side, where voices from The American Conservative, the National Review, The Washington Examiner or The Atlantic condemned the actions.

The uncovering of its unsuccessful attempt to mislead The Washington Post into publishing false information about the Roy Moore scandal in 2017 earned the journalists at Post a Pulitzer Prize.

At the bare minimum, it is unethical to fail to identify yourself as a journalist when speaking with others and intending to report on what they say and do; to distort chronologies or to edit a video so it fits your version of the story. Moreover, many activities of the group were illegal.

The founder of the guerilla-journalist group, James O’Keefe isn’t a saint, either. Last week, he was permanently banned from Twitter, the official reason being that he allegedly used multiple fake accounts to boost his following. He was also accused of trying to artificially amplify or disrupt conversations.

Project Veritas recently caused upheaval with releasing a few videos of a CNN staffer, technical director Charles Chester, saying … many things. Including that the network is trying to help “Black Lives Matter”, played up COVID-19 death toll for ratings and that the network promoted anti-Trump “propaganda”. Chester is recorded saying (in connection with CNN’s coverage on BLM and racially motivated attacks against Asians), “They just aren’t saying anything. You know what I mean?” or (in connection with the 2020 US elections) “If it wasn’t for CNN, I don’t know that Trump would have got voted out. I came to CNN because I wanted to be a part of that.”.

In another part of the video, the man said, “Trump’s hand was shaking or whatever, I think. We brought in so many medical people to tell a story that was all speculation that he was neurologically damaged and he was losing it. He’s unfit to, you know, whatever. We were creating a story there that we didn’t know anything about. That’s what, I think that’s propaganda.”.

This wasn’t the group’s first attempt against CNN, though. On June 26, 2017 Project Veritas released a hidden-camera footage showing John Bonifield, a producer of health and medical stories for CNN, stating that “CNN’s coverage of the Russian investigation was for “ratings” and that the coverage was “mostly bullshit”. Bonifield was portrayed as a senior decision-maker at CNN in the video, while in reality he had no involvement in CNN’s political reporting. The video was followed by two more, both depicting CNN employees in unfavorable terms.

Given Project Veritas’s history, the fight against CNN is by no means a David vs Goliath thing, with the righteous, brave and small young man fighting against the giant with a single sling and rock.

Still, it raises at least one question.

If the situation was about a politician and not a media group, an interview like this could/should/would mean the end of his or her career. Just think back at the latest of such scandals, involving Austrian politician Heinz-Christian Strache, who also fell victim to a honeytrap, known as the “Ibiza-affair”. (For those not familiar with the details, Herr Strache, the former Austrian Vice-Chancellor and former leader of the Freedom Party of Austria (FPÖ) had to resign from all of his political posts after a video emerged of him in Ibiza, offering business contacts in exchange for political support from a woman posing as the niece of a Russian oligarch.)

The network (and social media) lashed back vehemently against Project Veritas.

While it is understandable, the other side of the coin is missing.

There is no word about an honest and thorough, independent examination. To prove that the allegations that the “media is corrupt and broken” or that “mainstream media and tech giants are lying to the people” are wrong. That the things Charles Chester was talking about didn’t happen. (Just like no real explanation was given or investigation was conducted, after German media deliberately distorted the news on the New Year’s Eve events in Cologne.)

When such an external review was conducted, like in the ACORN case, it could easily clear the accused of any illegality, but also revealed that, at least in the ACORN case, poor management practices did contribute to unprofessional actions by some low-level employees, even if none of those were criminal acts or counted as aiding or abetting criminal conduct. The New Hampshire Primary video (2012) also led to an investigation, that revealed vulnerabilities, but no actual wrongdoing.

If James O’Keefe lives up to his promise and indeed sues CNN for defamation, the group will have to do it anyways.

Not to mention that if CNN is ever to credibly report on climate change again, it first has to prove that it is not only doing it because “Americans are feeling fatigued from the constant drumbeat on the pandemic” (quote from Mr. Chester).

The days of “ritually objective news reporting” are probably gone, it is something that happened gradually since the 1970’s, from the time when increasing emphasis had been placed on analysis – on trying to find out the “why” instead of servantly reporting about the “who, what, when, where”. It’s not necessarily “fake news”, in most cases it is not, but the difference between “fact” and “opinion” is not always clearly stated.

But it is a different thing that “insiders” (journalists, editors, managers) know this and that the public is made aware of it. Mainstream media repeatedly blames fringe papers or websites for biased, for ideologically influenced reporting or for having bucked the traditional rules of journalism, while they themselves often fail to show how they gather their news and what set of values influences their reporting. Admitting and emphasizing that reporting is guided by values or is intending to shift public opinion might not be easy, but would at least be honest.

Probably it would help to increase the generally low level of trust in media. A 2017 survey by Edelman showed that the number of people who said they trusted British news outlets at all fell from an already low 36 percent in 2015 to a mere 24 percent by the beginning of 2017. In the same year, Reuters Institute found that just 41 percent of British people agreed that the news media did a good job in helping them distinguish fact from fiction. “Mainstream media” as an expression equals for many as “bad”.

Without a healthy dose of self-criticism, CNN (and mass media in general) might end up “fitting” the old Biblical saying, “Why do you look at the speck of sawdust in your brother’s eye and pay no attention to the plank in your own eye?”.