The refugee crisis in Ukraine mobilizes the neighbors 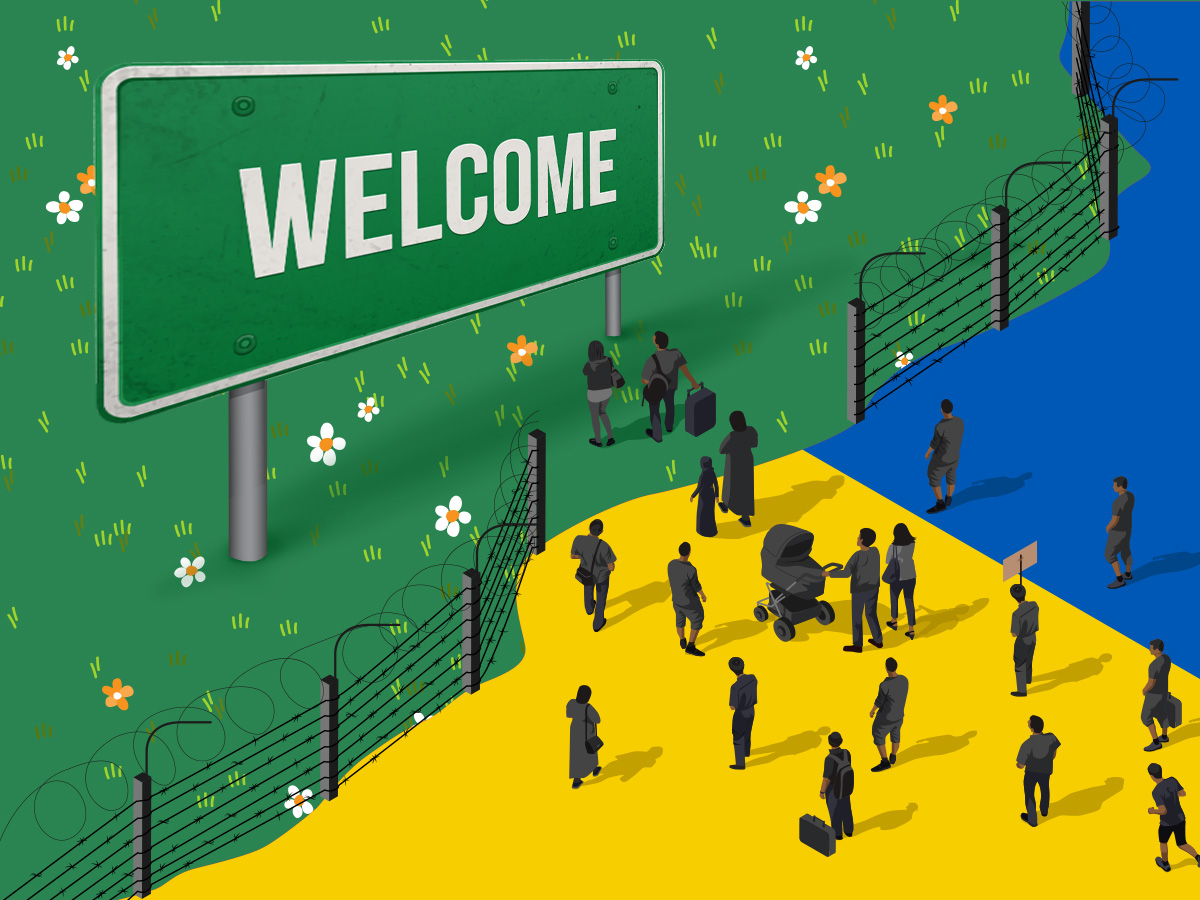 The refugee crisis in Ukraine didn’t start with the Russian invasion. At least not this one. Already after the annexation of the Crimea, millions left their homes. Most of that movement was internal, though.

But the Russian military action resulted in “a million human tragedies”, a humanitarian catastrophe unseen for a long time in Europe before. News were full of groups of refugees arriving to the borders, often after traveling for several days, waiting in queues stretching back many kilometers, in freezing temperatures.

As of March 8, the official number of refugees who had crossed the borders of Ukraine is at two million people and counting.

Most of them are women and children. A large percent of the latter are unaccompanied minors.

And this is, more likely than not, only the beginning. The longer the war lasts or if Russia manages to gain some ground, the more territories it occupies, the higher these numbers will grow. The UN estimates that within the next weeks, the number may reach four million and that, by the time the conflict ends, as many as seven million Ukrainians could end up fleeing their homelands.

The human suffering brought on unprecedented mobilization and solidarity in every country bordering Ukraine. The majority of the Ukrainian refugees is currently in one of the neighbors of the country, mainly in Poland, but also many headed to Slovakia, Romania, Hungary and the Republic of Moldova.

Besides the international efforts spearheaded by the UN (Save the Children, UNICEF Ukraine, International Rescue Committee), countries, communities and individuals all rose to help those in need.

EU interior ministers, including those that had, previously opposed such measures, adopted an emergency measure on March 3, giving a green light to grant temporary residency to Ukrainians fleeing the Russian invasion, extending that measure also to people who had residency or refugee status in Ukraine.

The ministers also agreed on allowing people to cross without travel documents, a clear departure from strict Schengen regulations. As a spokesperson from the Polish border guard confirmed, “Check-in is as simplified as possible. The point is to confirm the identity of persons, verify documents, check the databases if they are not wanted persons.”

And the same is happening at every crossing point along the Ukrainian border, from Poland through Slovakia, Hungary, Romania and the Republic of Moldova. It is difficult to see, how it could be quicker, unless, of course, with no control at all, but given the high percentage of children, and even more so unaccompanied minors, such caution is necessary, to prevent other, different tragedies (like human trafficking).

Those, who have entered, are free to travel throughout the EU and to choose where to stay, and they often do so, as many of them have friends or families in other countries. But many of them will stay.

UN High Commissioner for refugees, Filippo Grandi, who called the situation “the fastest growing refugee crisis in Europe since World War II”, praised the assistance offered to the people of Ukraine, saying “these governments have done very well in their initial response. They were well prepared”.

Donations were collected, not only in communities near to the borders, but everywhere in the countries, in unprecedented amount; shelters had been raised; volunteers have rallied to help to prepare food, provide support in other ways); rechargeable fuel cards got collected (those can be used to help those, who assist in transporting the refugees who crossed the border on foot), refugees were taken in by families or were offered free places in hotels, hostels and other accommodations. Not to mention those little shows of compassion, gestures, kind words that help to survive (mentally) the shock. And so on.

Parts of those donations were used in shelters on and around the borders, but many truckloads of aid (food, medications, clothes, fuel) were actually transferred into Ukraine, to assist those, who decided to remain. Just in the last couple of days, Interfax-Ukraine reported about 41 Polish railway containers of aid (including modern fire and rescue equipment), 23 trucks of humanitarian aid from Turkey and 5 Hungarian trucks full of basic necessities arriving to the country, with additional promises in sight, like 5000 StarLink stations arriving from Slovakia.

And surely there was many more, that went on unreported by media, organized, collected and delivered by ordinary people who just do what they have to do to help the refugees, without seeking to advertise their deeds to the whole world.

A report on Aljazeera even showed a Hungarian rural town somewhere near the border, where, at least according to the author, inhabitants started with preparations merely a few hours after the Russian invasion began, to assist the people fleeing from their homes, because they “knew immediately people were going to come through”. Accommodations were set up, food and drink were being prepared.

The enormous outpour of solidarity, experienced by officials and reporters all around the borders of Ukraine and on various railway stations along the road towards Western Europe, a journey many refugees take, struck the hearts of many.

Leslie Zelinka Follow
« And, the winner is … China
Making a case for the words (instead of the swords) »