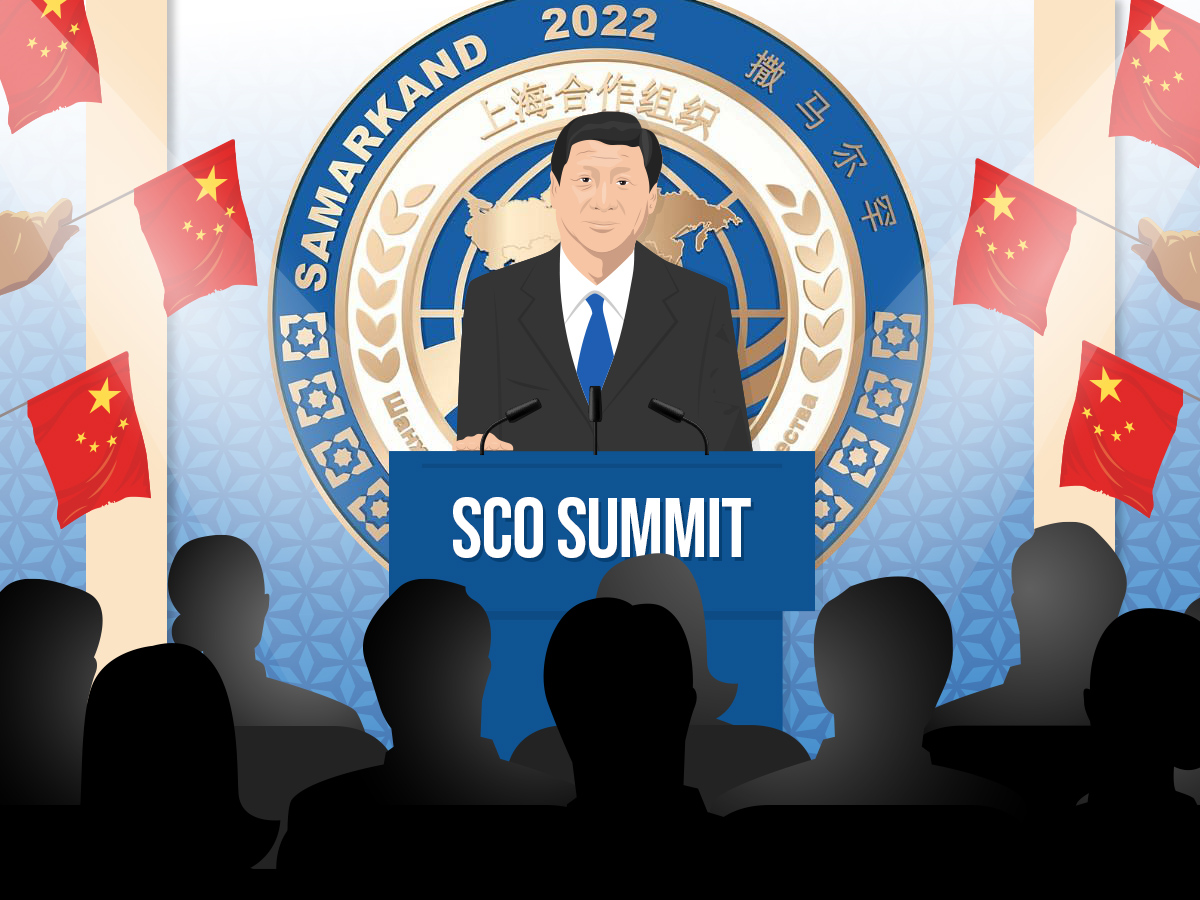 Whether Mr. Xi Jinping will get confirmed for his third term on October 16, on the 20th National Congress of the Chinese Communist Party or not, he left no doubt about where his country is heading.

“The Eurasian continent is home to us all.” He said, standing in Uzbekistan, in the legendary city of the Silk Road, Samarkand; on the meeting of the Shanghai Cooperation Organization (SCO). A meeting that aimed to push back against Western influence on the continent and to solidify ties between the many Asian nations.

In that, China is to play a leading role, because it has “the responsibility, capability and confidence to make historic contributions to the progress of scientific socialism”.

During his visit in Uzbekistan, Mr. Jinping managed to accomplish several feats, like delivering a veiled punch at Russia for the failure of the Soviet Union (“Just imagine this, had socialism failed in China, had our communist party collapsed like the party in the Soviet Union, then global socialism would lapse into a long dark age”), accepted a new member to the SCO in the form of Iran, and raised the stakes on the field of global security.

And it came just a day after his remarks about China’s support for the territorial integrity of Kazakhstan, yet another clear warning aimed at Russia.

In Samarkand, Mr. Jinping spoke about his new pet project, the Global Security Initiative, that was called to life because of the “need to expand security cooperation”, due to “the complex and challenging environment both at home and abroad”.

It is rather unlikely, that the SCO will grow into an Asian NATO in the nearby future, but the intent is that, at least based on Mr. Jinping remarks, who dreams about building “a balanced, effective and sustainable security architecture”.

But it showed, once more, that Russia’s war in Ukraine has actually led to the strengthening of China. Beijing has been aiming for Eurasian dominance for decades, yet, now it actually has more chance than ever.

A clear proof of this should be President Putin’s statement at the annual summit of the SCO, who, in a rare gesture, admitted that China’s concerns regarding the events in Ukraine are valid.

Acknowledging that his country’s actions have direct impact on its closest allies is not something Mr. Putin often did in the past, proving that Russia has grown more dependent than any time before on Beijing. And while China might help Russia out with the promise of building the much expected Power of Siberia 2 pipeline, a step clearly aimed at (at least from Russia’s side) replacing the Nord Stream pipelines, it will just the more increase the dependency.

The SCO summit came just a week after China and South Korea have signed a MOU to reinforce collaboration in supply chain network and to “set up a Collaborative Supply Chain Council”, to further enhance cooperation and to secure the functioning of the “mutually intricately connected” supply chains. The two countries also signed a MOU on “Reinforcement in Real Collaboration in Economic Field”, that aims to enhance cooperation between regional cities and exchanges among corporations and think tanks. The third MOU, on the “Joint Penetration to Third Countries”, is, as the name suggests, a sign that both countries see a real chance to pursue projects of mutual interest.

The Korean step (clearly going against US efforts to exclude China from global supply chains, especially “Chip 4”, a semiconductor industry alliance between the US, Japan, Taiwan and South Korea) reflects the mutual needs: South Korea needs a stable Chinese market to export its key products (in 2021, more than 40 percent of South Korea’s semiconductor exports went to China, most of which is produced from components originating from China), just as much as China does.

While the efforts of the US are clear, the question will be whether the US can force South Korea to turn its back on China, given the enormous losses the country is to suffer after such a move or not.

It should be a warning sign, maybe, that even Taiwan, threatened in its very existence, has an enormous and rather lucrative electronics trade with China. And American companies, like Intel and Nvidia also have a lot to lose would China be completely excluded from the market.

Though seemingly separate and independent issues, the slow pace of progress in the field of efforts to shun China show, that most of the world (just like in the case of Russia) is unwilling to follow the lead of the US, in fact, gets a chance to break out from Western-led isolation (think Iran), as power is getting more and more concentrated and focused in China’s hand with the weakening of Russia.

China has (beside its military potential) far more effective tools on the global markets to retaliate, and has the financial means to redouble efforts to develop their own technology. As stated in the 2014 Guidelines to Promote National Integrated Circuit Industry and the “Made in China 2025” policy, that aim to raise semiconductor self-sufficiency rate to 80 percent by 2030, even if it is unlikely that China will be able to completely reach its goals.

Sanctions are expected to hurt Russian industry, as it runs out of necessary spare parts.

Ironically, similar sanctions against China could backfire even more, as sanctions against Russia do on Europe (as a recent article on Council of Foreign Relations highlighted). For example, in the semiconductor field; as most of the world is running not on cutting-edge chips, but on so-called “legacy chips” (semiconductors using “old” technology), a large percentage of which is produced in China.

As of now, the shift of power mainly manifested itself between Russia and China, the latter pushing into places and markets formerly occupied by Russia.

That means, for example the SCO as well, where Russia’s role is expected to diminish further, given the humiliation it suffered in Ukraine, while China might gain the upper hand. Especially as, while the threat of the “New Soviet Union”, some form of Russian rule over the former territories of the SU was always looming on the horizon, China’s ventures are less ideologically driven.

If it would happen, the SCO would become a formidable player on the global scene, as its member states would represent nearly half of the world’s population and several economic heavyweights.

The path is not straightforward, though, as the group is far from united, and relations between the members are burdened by several issues (Beijing’s treatment of Muslims in Xinjiang or the situation on the Sino-Indian border are just two of the many), but the opportunity is there.

Russia didn’t succeed in turning the SCO into a powerful tool, Mr. Xi Jinping might. More Asia, than Eurasia focused, but still.

Leslie Zelinka Follow
« PETA gone overboard (again)
A slap across the face of the West? »