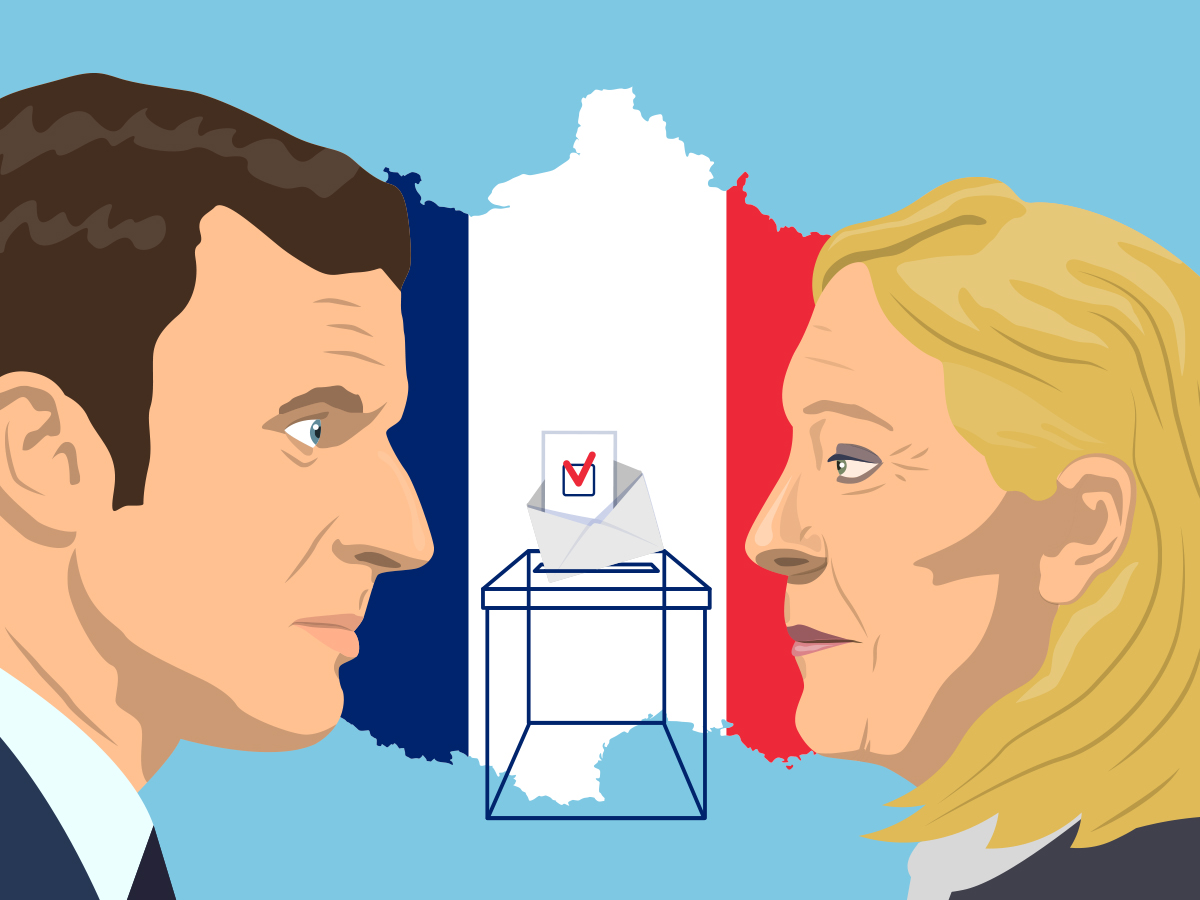 Though the results of the first round of the French presidential elections seem to mirror the outcomes of the previous battle five years before, there are some significant differences in the details. That, on the other hand, might alter the outcome, but will definitely force Emmanuel Macron and his party to reconsider a few policy issues even if he will win in the end.

Electoral maps are really interesting to look at and help to visualize, probably better than any chart can do, the sentiments of the population. (Like the distinctive blue and red patches of voters in the US showing the cultural divisions between the greater regions of the country, the electoral maps of Poland where voting patterns mostly reflect the border of former Prussia or the almost uniform orange of Hungary, that shows that support for Prime Minister Viktor Orban is basically universal all over the place.) These are realities that should not be neglected when dealing with a given country.

Despite the campaign slogan of President Macron (Nous tous, We all), the map of the French elections shows a very divided country.

Marine Le Pen managed to win in the industrial north of the country (the French “rust belt”) and (probably not surprisingly) on the Mediterranean coast (a far-right stronghold by all accounts).

President Macron came on top in the West, the center and the regions on the East, bordering with Switzerland and Germany; while Mélenchon got the lead in Paris and its neighborhood and in the French Caribbean.

Macron is in front, but…

Though, in the end, the incumbent president won by a wider margin than most pollsters predicted (finishing on 27.8 percent, compared to Le Pen’s 23.1 percent), but the gap is still smaller than it was in 2017.

Back in 2017, Macron was helped by many things, among others the disastrous performance of Le Pen during the debate of the presidential candidates. It is unlikely that she’d repeat the same mistake again. Her reputation wasn’t really tarnished (at least not in the eyes of many) by the close contacts she and her party have (or had in the past) with Russia, either, probably because Le Pen was quick to condemn the war in Ukraine. It is likely though, that ties with Russia will play a more important role in the run-up to the second round, especially as the voters of Mr. Macron seemed to be satisfied with the way he handled the conflict.

It is likely that voters, who in the first round supported Éric Zemmour, would cast their ballots for Ms. Le Pen in the second round. President Macron can probably count on the voters of the more mainstream right and the Greens. He managed to convince the left in 2017, but it is not to be taken for granted that he will also manage to do it this time. (Especially, as another analysis drew attention to the fact that Green topics he mentioned, didn’t really bring, at least not for him, the votes he hoped for. But neither did the Green party reach a result that would show that French society in general is deeply interested in environmental issues.)

But to secure a sure win, he will also need the votes of Jean-Luc Mélenchon’s supporters. They were urged not to vote on Le Pen, but it doesn’t mean that they would eventually show up at the urns. In general, the supporters of Mr. Mélenchon tend to be mainly from the 18-to-34 age group, yet, they are exactly the less easily mobilized group. So, it is a safer bet to predict that they’ll abstain from voting altogether.

All in all, even if Macron manages to secure a win in the second round, he’d need to adjust his policy choices to face the new political realities and to try to change his status as the “president of the wealthy”; as many of his pro-business policies were prompting voters to turn to the extremes.

It is probably also not a coincidence, that (at least according to a poll by Ipsos France) 43 percent of voters who said that they were “very satisfied” with their life voted for Macron, while those who said that they were “not at all satisfied”, voted mostly (46 percent) for Le Pen, who repositioned herself as a “more moderate” right-wing candidate (at least compared to Zemmour) and one, who focused on everyday issues (like the cost of living), to gain the votes of those in worsening economic situation, unlike the president, who spent his time trying to manage the conflict in Ukraine.

With inflation soaring, energy prices skyrocketing and no end in sight for the conflict in Ukraine, President Macron will need to work really hard to convince those voters that he has the keys to a better future.

No matter who wins, the political realities will change

The two traditional parties of government in France, the Les Républicains and the Socialists are basically finished, at least on the national level. On the local level, the republicans are still a force to be counted with, but Valérie Pécresse scored just 4.7 percent. As only those candidates can have their expenses reimbursed by the state who reached the five percent threshold, the republicans face a dire financial crisis.

The Socialists fared even worse, with popular Paris mayor Anne Hidalgo managing to reach only 1,7 percent.

In the coming years, Macron’s mainstream(ish) block in the center (liberal, globalist, pro-European) will have to work with the two extremes on the right and the left.

In fact, by some accounts, if Mélenchon would have had all those votes that were cast on a plethora of left-wing candidates, he could have easily had Ms. Le Pen’s position in the second round.

The same is true to the other end of the spectrum, too. Parties on the right will be (and likely to remain so), a force not easily ignored. Le Pen fared better than she ever has. For many, the ideas offered by those parties are credible alternatives.