And, the winner is … China 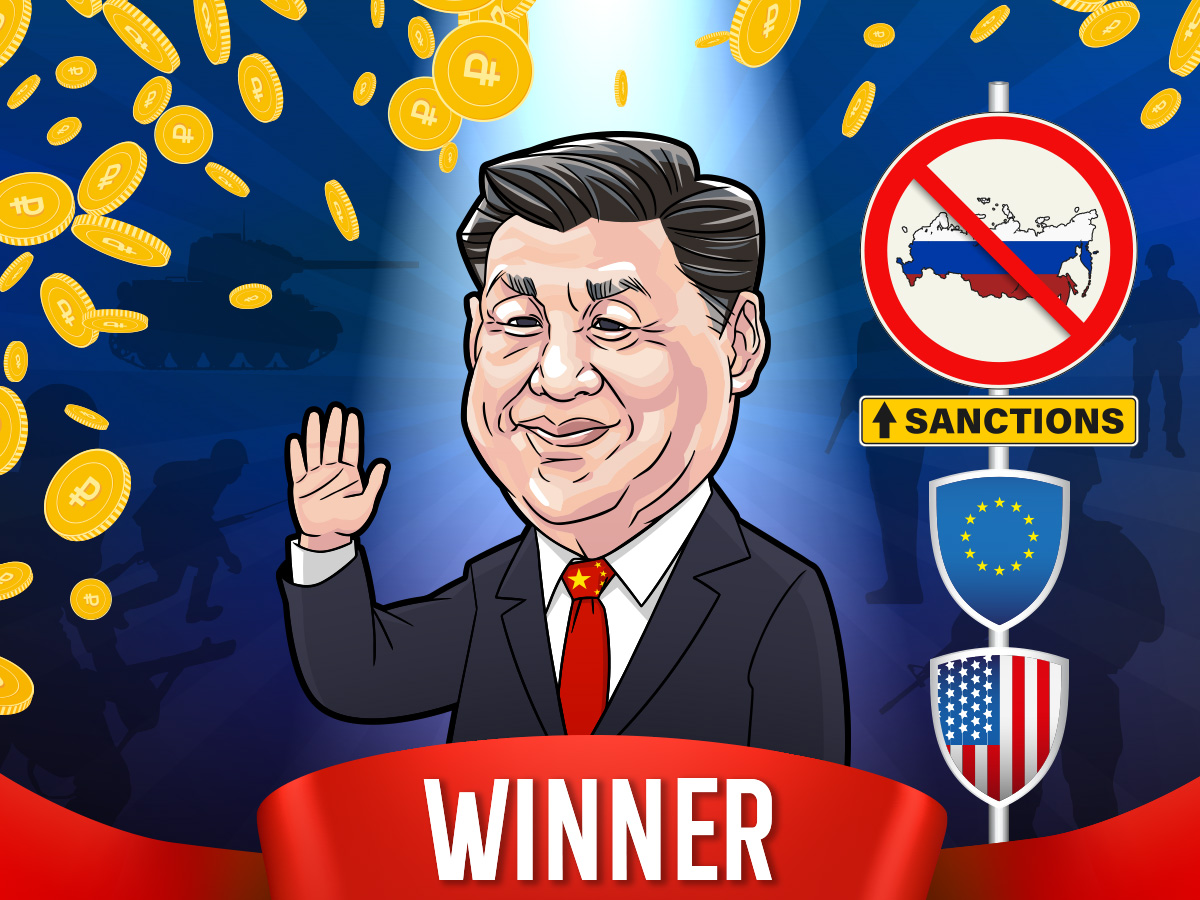 As Mastercard and Visa and American Express stopped or suspended their operations in Russia (either part of the sanctions or occasionally, self-sanctioning, acting before public outrage would force them to do so), Russian banks have started to get contracts with China’s own UnionPay system, currently used by 1300 financial institutions (though mostly indirectly) in 180 countries. Some had been doing that so for a while, others like Sberbank and Tinkoff are contemplating to start issuing cards co-badging Russia’s domestic MIR payments system with UnionPay.

There’s been hardly a day without some new sanction being announced against Russia. The intention was loud and clear, to stop Moscow’s incursion into Ukraine. President Biden was right in noting, that all those sanctions “exceed everything we’ve ever done before”.

The West stands united against the aggression and is ready and willing to pay the price of this. There is a frantic activity behind the scenes and on the surface, to diminish the effects of those sanctions in Europe, where energy prices are soaring, fears of supply-problems are mounting and inflation is taking off.

The effects of the united front have already started to show in Russia, the value of the ruble is in ruins, Russian stock markets had been closed for most of the last weeks, foreign companies are fleeing the country.

Alas, there has been hardly a day without China offering, either directly, like when offering to buy excess Russian wheat; or tacitly, with allowing Russian banks to use its system, a lifeline to the Russian economy.

It is yet to be seen, to what extent China can (or wants to) act as an alternative trading partner for Russia.

Opinions differ widely on this.

Read Paul Krugman’s last entry on The New York Times, for example, who argues that it cannot.

For four main reasons: A) because China is not in the position to supply some things Russia needs (like spare parts for the Airbus planes in the fleet of Aeroflot), then B) because China is very far away from the main Russian industrial centers (due to, you know, that big, mainly uninhabited patch called Siberia and C), because China is deeply integrated into the world economy and doesn’t want to get kicked out of it and finally as D), because the Chinese economy is about 30-times bigger than the Russian.

Alas, none of these will actually mean that China cannot or will not help Russia, mitigating, at least partially, the effects of the sanctions. Not to completely save Russia, just to keep it alive. And indebted.

Not that Moscow, or those ordering the sanctions had this effect in mind, but the outcome might actually be a China stronger than ever before.

The Eastern parts of Russia already have often stronger economic ties to China (and South Korea), than the rest of the country (exports are diversified, but imports, mostly machinery, equipment and metals, are heavily dominated by China). This is true, even if, in theory, the development of the resource-rich Russian Far East (RFE) was declared a “national priority for the 21st century”. And even if, due to a wide variety of factors, the RFE is not yet a significant partner for China.

That could undergo a radical transformation in the event the sanctions render the central government in Russia even less functional and even more resource-poor than before. And though it is far from the industrial centers in the West of the country (mainly over the Ural), the RFE region (and Siberia, for that matter) has plenty of resources.

Connectivity is bad among the two countries, that’s also true. But the wave of sanctions and the setbacks of several projects might give a push to those other infrastructural investments (think One Belt initiative or the bridges in construction above the Amur River), especially since the economic disaster hitting Russia will eventually affect Central Asia as well, and all would search for alternative markets and trading partners.

And it is also true that China, though failed to side with the West, has so far refrained from offering Russia practical aid (cash or weapons), and did so potentially for fear of jeopardizing its own access to global markets. But, in the same time, Chinese Foreign Minister Wang Yi said on March 7, that the two countries will keep deepening their “comprehensive strategic partnership of coordination for a new era”. He also offered to mediate between Russia and Ukraine. (A country, in which, by the way, China has also some vested interests, in the form of agricultural lands, for example. For China, Ukraine is important, but just like with countries in Africa or elsewhere in the world, the exact form political leadership doesn’t matter much as long as investments are secure.)

One could ask, but they are pals, aren’t they? They took every opportunity to bash the West together in the last couple of years. Why would Beijing abuse the situation?

And why would risk Beijing cutting ties with the West by openly supporting Russia? The Russian invasion of Ukraine was started only after the Olympics, after all, wasn’t it? Beijing’s failure to condemn the Russian action, urging instead the parties to find a solution and declaring that one country’s security cannot be guaranteed at the expense of another’s, could be interpreted that way.

One shouldn’t forget that Chinese are masters of strategy.

Think Go, for example. An abstract strategy board game, invented in China more than 2500 years ago. Actually, a much more complex game than chess.

And with the goal of achieving relative advantage by occupying more space. That also means that it is much more possible to have a tactical loss, if, in the long term it confers to strategic advantage.

The emphasis is on long term.

Despite the appearances, like their eagerness to undermine the US-led international order, there had always been tensions between Russia and China, not to mention the mutual distrust and suspicion, rooted deeply in history, dating back way before the Communist times.

With the Russian banks kicked out (or suspended) from the SWIFT system, there would be even less reasons, for which the economy of Russia, still relying a great deal on export revenues and on international trade, would keep its distance from China. In fact, economic rapprochement had been going on for years, and the sanctions are likely to accelerate this process. And Russian exporters, in search for costumers, might be forced to accept the (not necessarily friendly) terms of Chinese buyers.

Like using yuan instead of dollars. As of now, most of their energy trade is in dollars. Currently, only about 17 percent of trade between the two countries is in yuan, if one is to believe official statistics. But keep in mind, that seven years ago, it was only a mere 3 percent.

China’s own (alternative) payment system, the Cross-Border Interbank Payment System (CIPS) is not a match to SWIFT. Yet. But the “weaponization” of SWIFT, pretty much like the weaponization of sports, could force others to increase their efforts to reduce their reliance on the dollar-based system. As Russia, and its own System for Transfer of Financial Messages (STFM), would likely not be an option, that gives even more room to China.

The two countries were getting closer and it was likely to continue with or without the invasion and the unified Western response.

The difference now would be that Russia, that clearly cannot and will not reach a decisive victory in Ukraine; would likely lose some of its great power image, rendering it even more dependent on China and less capable to stand on equal footing.

China tried to steer clear from the conflict, trying to maintain a balanced/neutral position, not to escalate tensions with the West further. This stance is unlikely to change,

There were even voices that prognosed a war between the two in the 2020s in the RFE region. There are some Chinese military maps, after all, that depict parts of the RFE as if those would belong to China.

And given the sheer difference in size (let it be population or economy-wise), stand-offs and skirmishes between the two, similar to the ones China has with Vietnam, the Philippines or basically anywhere in the South China Sea, could have truly happened in the future. (If you are a fan of spy novels, that is the exact scenario that plays out in Tom Clancy’s alternate universe, The Bear and the Dragon, China invading Siberia for its reserves. And the story ended with the US rushing to help out Moscow, the old enemy.)

Now, with Russia an international pariah and its economy starting to fall on its knees, kept alive at the mercy of Beijing, there might not be a need for Chinese military intervention, to force Russia to make concessions, allowing China to gain more ground. On many fields. And in many parts of the world.

Marta Loeb Follow
« European energy supplies revamped by the end of the year? But at what price?
The refugee crisis in Ukraine mobilizes the neighbors »