Children of the world, unite! 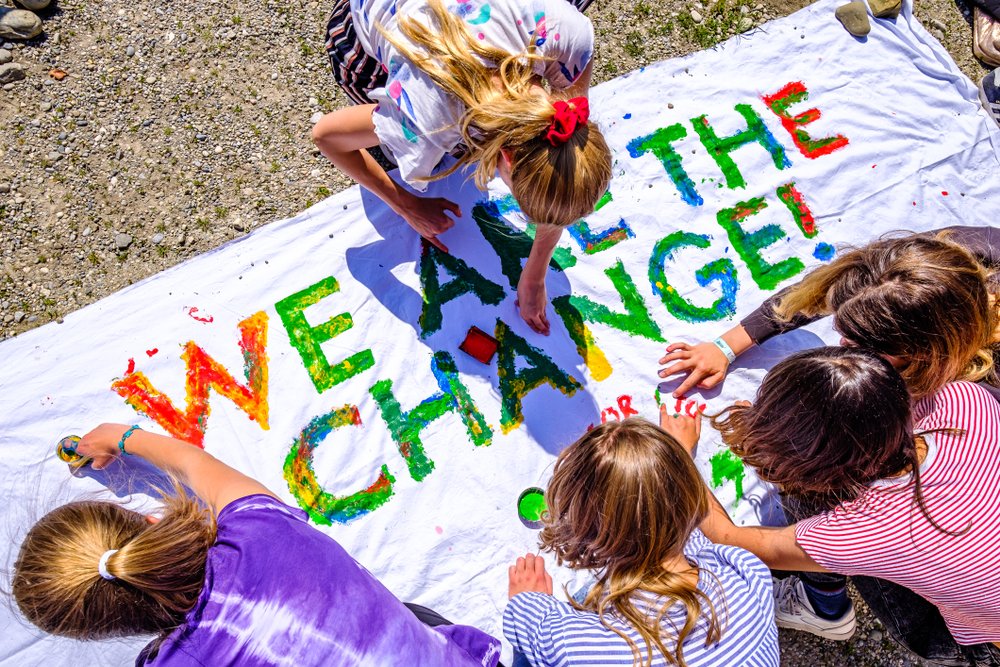 Fast rising sea levels. Rainforests burning. Greenland ice sheet melting. Glaciers disappearing. Heat waves. Drought. Flooding. Fishes disappearing. The problems caused by climate change are visible all around the globe, even if it is not happening at the neck-breaking speed of The Day After Tomorrow. Scientists around the globe have sounded the alarm bells for the last couple of decades but change happened slowly.

Now VERY young activists around the globe have found their voice and demand fast change.

The face of the movement is Greta Thunberg (16), a Swedish girl who started to skip school on Fridays (hence the name Fridays for Future) to protest on the steps of the Swedish parliament. She has followers all around the world. Protestors in Australia and the UK alike shouted her name.

She is neither the first, nor the youngest (Severn Cullis-Suzuki Canadian biologist addressed the Rio Summit in 1992 at the age of 12) child to raise her voice, but thanks to the amplifying effects of social media, her voice echoes louder than that of her predecessors. (Some of whom have achieved tangible results in the Bahamas, Barbados, Ghana and in many places around the world with far less media attention, and without marches or strikes.)

And luckily, she’s not the only one. Autumn Peltier (14, AshinabekNation), Isra Hirsi (16, U.S. Youth Climate Strike), Xiuhtezcatl Martinez (18, Earth Guardians Youth Director), Alexandria Villasenor (14, Earth Uprising) and Diana Monteiro (Spain) are just a few examples, some faces from the millions. They are all younger than any protestors before, therefore more open, straightforward (a la The Emperors New Dress) and less concerned with the details of what and how should be done.

Their mantra is ‘It’s time to act and it has to be now!”

Yes, the costs will be high. Industries disappearing, the number of jobless people rising, economies slowing down. Politicians being punished by voters for hardships.

Yet, if 680 million people now living in low-lying coastal areas get on the move, it will cause a migration wave unprecedented in proportions since the 4th-5th (etc.) centuries. (Remember, the one that, coinciding with other changes, wiped out the almighty Roman Empire.) That will have costs, too.

And with the 680 million, we are talking about only people living in coastal regions. About the same sized population lives in areas with insufficient water supplies. And about 670 million live in mountain areas affected by disappearing glaciers.

One might not sympathize with Greta and the other youngsters. Their worldview might seem simplistic and they can be accused of not taking into account a billion of reasons, side effects and consequences.

But sometimes we use these billions of reasons only as an excuse why we don’t do anything. Or to do only things that won’t hurt that much. (Like prohibiting drinking straws and cotton buds. Very good. But not enough.)

It might be our last chance to act. Probably not as drastically as the young protesters demand. (I know it is a bad comparison, but we don’t give the candy bar to our toddler just because she’s screaming louder and louder. Because we know it is not good for her in the long run.)

But we should definitely act faster than we’ve done it in the past. And the voices of the children should wake us. There’s no generation with as much at stake when it comes to the negative effects of climate change as Generation Z. Their future is tied to the planet. It is their future at risk.

The adults have whispered far too long behind the Emperors back without actually telling him the truth. It’s time for the Emperor to listen to the children.