Ukraine’s EU dreams: supported in theory, but how to set it in practice? 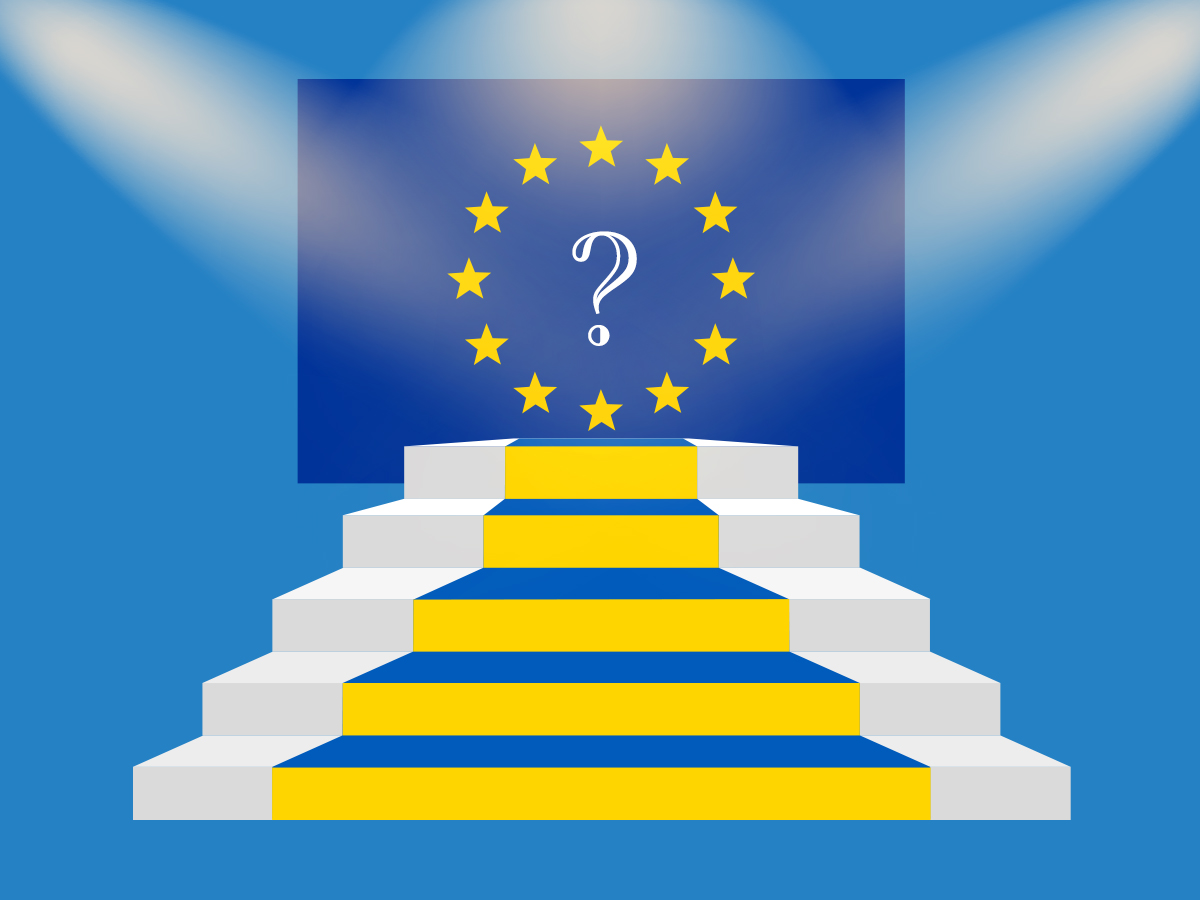 On her surprise visit to Kyiv, European Commission President Ursula von der Leyen tried to sound as positive as she could, reassuring President Zelensky that Ukraine was part of the European family. Though she reminded the president that despite progress on administrative reforms and elsewhere, much is still needed to be accomplished.

This was a message very similar to what von der Leyen said two months ago, on her previous visit to Ukraine, when she said, “dear Volodymyr, my message today is clear: Ukraine belongs in the European family”.

Despite this, it’s yet to be seen, how and what the EU Summit on 23-24 June will decide about Ukraine’s EU membership bid.

Ukraine has repeatedly argued that most countries (on the Western Balkans, e.g.) had gotten candidate status despite having had significantly more problems as regards to rule of law and the consolidated state of democracy than they have. The country’s deputy prime minister, Olga Stefanishyna even said that the step would be a sign of respect for Ukraine’s decision to move closer to the EU and “any hesitations would be a sign of weakness”.

Yet, even if the decision will be positive and the country will be granted a candidate status, and not just a symbolic pre-candidate status, nobody can realistically expect that the country would or could join the bloc within the coming few years. Just like, for example, French President Emmanuel Macron had pointed out, declaring that “we all know perfectly well that the process which would allow them to join, would in reality take several years, and most likely several decades”.

Not many countries have before managed to close all the negotiating chapters in such a short period. Only Germany’s new federal states were able to “accede” to the European Communities without delay, but it was by virtue of their incorporation into the territory governed by the Basic Law of (West)-Germany. Even for Austria, Sweden and Finland it took somewhere between three to five years and neither of those countries were in a similar situation.

As the EU has (legally and as of now) very little leeway to reduce the political and economic requirements, a decade is a more realistic bet. (As it was in the case of the last country to join, Croatia. Its application process lasted 10 years before it was formally accepted in 2013.)

Especially if the situation remains as it is today, with large swaths of the country under Russian occupation and in the state of war. While President Zelensky might be right that the candidate status would pull “his country out of the gray area between Europe and Russia” and “would prove that words about the longing of the Ukrainian people to be a part of the European family are not just words”, but it is hard to deny that the process would likely cause headaches in every capital around the continent, including Kyiv. And not only because Ukraine would become the poorest EU member (with a GDP per capita less than a half than the current poorest Bulgaria).

It is unlikely though, that Ukraine would be satisfied with what, for example, President Macron offered as an alternative. The “European Political Community”, that would include an “outer circle” (or many “avant-garde circles” deepening European integration in certain areas) of democracies that want to be part of the EU and that way Ukraine could be looked at as “already today as a member of our Europe”, might be an appealing concept for some, but not for Kyiv.

But with enlargement skepticism already having a great influence (or rather a blocking influence) on the membership aspirations of several other countries (like Serbia, Montenegro, North Macedonia or Turkey that’s been waiting since 1987, though had given up in the meantime), it is rather unlikely that Ukraine would get a differentiated treatment.

Even if it is in a dire situation and political support would represent a much needed moral boost.

And even if, at the bare minimum, the war in Ukraine has shaken up the EU, but at least its approach to enlargement a little. Once again, enlargement could be more than a mere technical process and could become a geopolitical tool, a motivational force, just like it was in the case of Greece and Spain and all the CEE countries.

Of course, one risk with granting preferential treatment to Ukraine is alienating those, who’d been waiting for much longer than Kyiv. Some, like Serbia, already (or, still) have strong(er) ties with Russia. As Austrian ministers Alexander Schallenberg and Karoline Edtstadler had already pointed out in their letter to Josep Borrell, “particularly against the background of the war in Ukraine, we have to remain vigilant and give the same priority to the Western Balkans as to Ukraine”, because “we cannot allow ourselves to create first and second-class candidates”.

Surely, “leaving those countries out in the cold” would push them into a political vacuum.

With or without Ukraine’s progress, the pressure will likely grow from the other countries to proceed with enlargement. And maybe the EU leaders will also try to do more to speed up those processes as the war in Ukraine clearly showed the vulnerabilities of, for example, the Western Balkans.

This could, maybe also reverse the fatigue felt within the aspiring countries themselves, too. As of now, with overall support for EU accession around 86 percent in Ukraine, it is the highest of all possible future members. Mainly because for the others, the process has been dragging on for years, without any real progress, thus the credibility of the accession promise suffered.

On the positive side, according to its own estimates, Ukraine has fulfilled about 63 percent of the requirements of the 2014 Association Agreement. Others, like Alan Beattie (Financial Times, January 26, 2022) were not that optimistic, saying “Ukraine, a dysfunctional economy with a woeful business climate, has failed to get itself in shape”.

And support for Ukraine’s accession is around 42-60 percent in current member states (compared to 20-30 percent supporting the accession of the countries of the Western Balkans).

Alas, the current military situation in Ukraine creates a sort of Catch-22.

Even if, theoretically, it would be granted a candidate status, Ukraine is unlikely to successfully negotiate its way to accession (unless the process is changed considerably), because of the situation in the Donbass Region. To be able to do so, it would need to, at the bare minimum, regain control over its own territory, but (probably even more preferably) would have to sign a peace agreement of Russia and it should work.

But, in the current situation, it is unlikely that Russia would sign such a deal, unless Ukraine cedes the territories currently under Russian occupation and declares that it stays neutral and/or renounces its EU accession dreams.

With respect to all of the above, the question is there: would Ukraine actually benefit from being granted a candidate status? Would the prospect of EU accession be motivating enough to give the country and the population the push it needs to fulfill the reforms, or will it turn out into yet another accession promise that may not ultimately be realized?

The short term solution could be to offer a generous package to Kyiv (including anything in between military aid and macro-financial assistance) both now and for after the war, and a mechanism to assist its efforts to undertake those much-needed domestic reforms, not necessarily the coordination platform and financial facility proposed by the European Commission, but something of that nature. That is a process, in which the EU has tried and trusted instruments to provide support.

In fact, the prospect of accession could and probably would provide the much needed FDI, the lack of which has previously hindered Ukraine’s economic development, because it would change the investment environment and would also address the issue of labor migration.

All in all, a step towards accession could prove to be a catalyst for progress.

Not only for Ukraine, but for all the others in line.