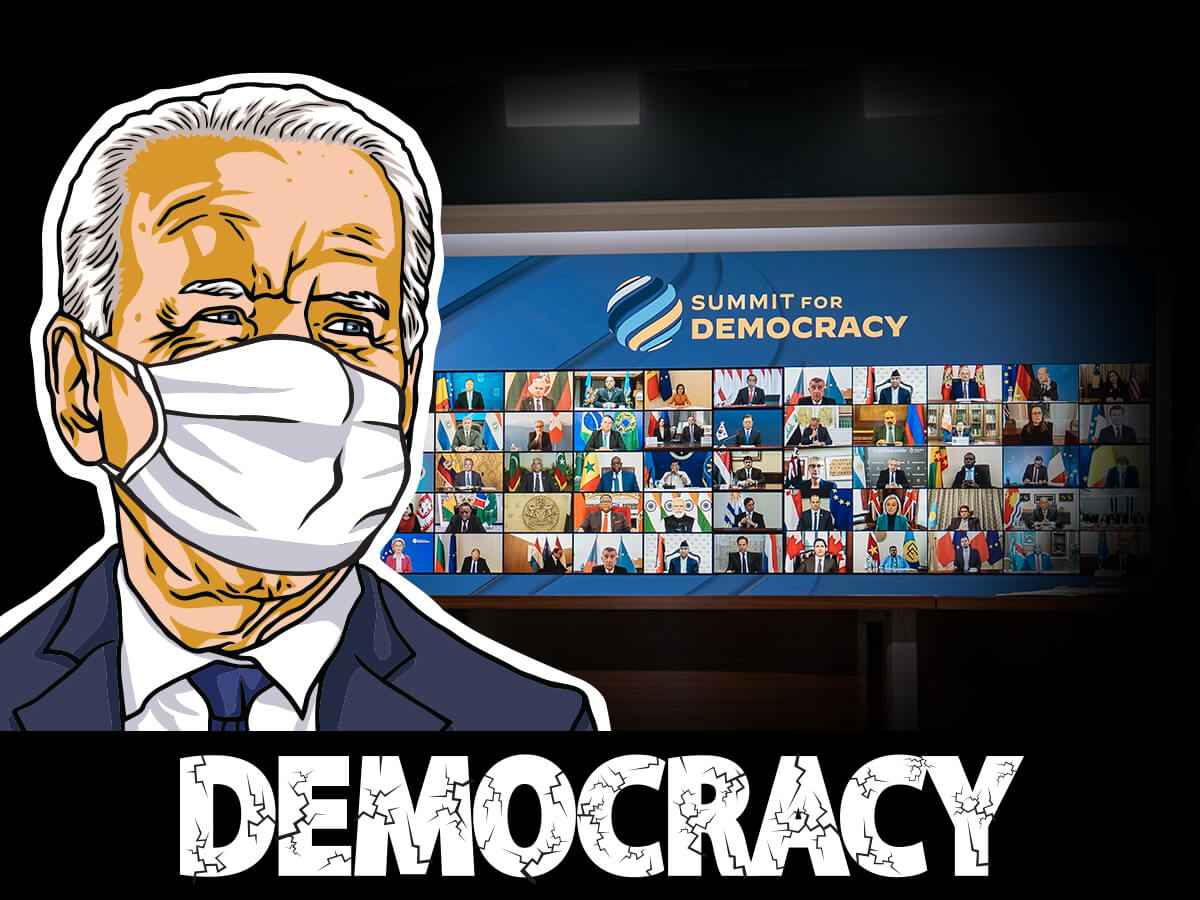 Summit for Democracy was the name of the most prestigious (?) online event of the previous week, hosted by President Biden.

When then presidential candidate Biden promised to hold a democracy summit, the main and respectable goal was to bring under one roof politicians from all over the world, that turned into “on one screen” due to pandemic related-problems; in order to build and strengthen national and international will and efforts to promote democracy.

Or, as President Biden declared at the opening of the summit, to have “a vision and the vision, not just a vision, the vision and courage, to once more lead the march of human progress and human freedom forward”, against the authoritarian models of Russia and China, “the defining challenge of our time”.

Alas, the guest list almost made sure that there was no real debate about how exactly to do it, because it turned the event into a meeting of “like-minded leaders”, who could easily shout into the void their condemnation of those left out, while there wasn’t really room to listen to counter-arguments and reasons, to search for alternatives.

And while it might be understandable if one is to organize a nice and cozy family dinner, where difficult or uncomfortable topics should be avoided for the sake of peace, it is maybe not the right way to manage a summit if one is to have real results. Definitely easier to come to an agreement among themselves, yet probably more difficult to get others in line after being left out.

Especially paired with the other shortcoming of the summit.

While no participant spared their words to bash Russia and China (even if both did deserve it), less condemnation was aimed at other invitees, despite several of those countries having some serious issues with the democratic functioning of their institutions.

It is hard to explain how could Pakistan, for example, make it to the list (even if it backed out in the last minute), if not for geopolitical considerations and regional dynamics, faring really low on the World Justice Project’s Rule of Law Index (130th out of 139). The same applies to the Philippines, South Africa, Nigeria or the DRC (137th out of 139).

The White House tried to explain its deed by claiming that “the invitations should not be treated as a stamp of approval on their approach to democracy. (…) This is an opportunity, again, not to celebrate everything we’ve done on democracy (…) and call it a day. It’s an opportunity to continue to strive to do better.”

Unfortunately, inviting “dubious achievers” does the exact opposite.

Even more so, if we take into account, that Bangladesh was not invited. Neither was Turkey or Hungary, both faring much better on the same list than either Pakistan or the Philippines, but all having butted heads with Washington lately.

As long as geopolitical considerations could prevail over democratic performance, it is relatively easy for Moscow or Beijing to label the event as the tool of Washington to promote its own foreign policy agenda. Just like the Chinese Embassy in Washington did, claiming “the US, based on its own criteria, listed half the countries and regions in the world as democracies and the rest as non-democracies. This practice in itself runs counter to the spirit of democracy and exposes the US’s true intention of weaponizing democracy, and using it as a tool and cover to advance its geostrategic agenda and repress dissenting voices.”

Barring the inconvenient relatives from the table also ensured that the host itself was treated leniently, despite some serious issues at home on the democratic-front. (Think criminal justice, for example.) President Biden used very cautious terms in his opening remarks, stating, “American democracy is an ongoing struggle to live up to our highest ideals, and to heal our divisions and recommit ourselves to the founding idea of our nation captured in our Declaration of Independence, not unlike many of your documents.”

If the US is to lead by example, then it should definitely improve its record at home and not just trying to change the others’. President Biden quoted the 2020 Freedom House report, that marked the “15th consecutive year of global freedom in retreat”, but he somehow failed to mention that his home country experienced one of the worst backsliding among Western democracies.

Black Lives Matter indicates that human rights and racial injustice is not just a problem of China, gerrymandered voting districts prove that voting rights might not fully respected and the almost weekly occurrence of mass shootings shows some serious problems with polarization and domestic extremism. Maybe the US should first do a little house-cleaning itself before criticizing others.

Otherwise the proudly launched Presidential Initiative for Democratic Renewal , the newly announced funds, among them the International Fund for Public Interest Media and Defamation Defense Fund for Journalists; and the promised $424 million aid to “shore up transparent and accountable governance, including supporting media freedom, fighting international corruption, standing with democratic reformers, promoting technology that advances democracy, and defining and defending what a fair election is” might end up being viewed as the summit itself, only a tool to further US foreign policy agenda.

Yet another question (just like with every big summit declaration) is the actual work done after the summit: what commitments were taken and what percentage of those was actually implemented within a year and how to ensure compliance. Starting with the Biden-administration itself, that promised that 2022 would be a “year of action” and the summit would be only the first step .

But of course, just like the old joke about meetings (“Are you lonely? Tired of working on your own? Do you hate making decisions? Hold a meeting! You can see people, show charts, feel important and impress your colleagues.”) goes, a large and spectacular summit can be a perfect and practical alternative to real work.