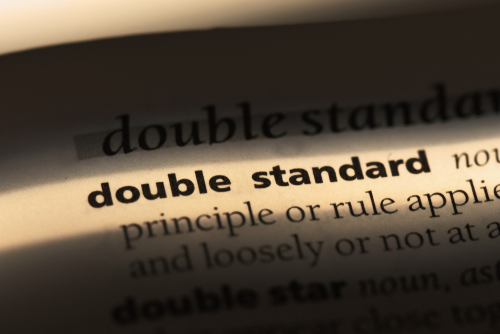 Thou hypocrite, first cast out the beam out of thine own eye, and then shalt thou see clearly to cast out the mote out of thy brothers eye. (Matthew 7:5)

Even if you’re not Christian, you might have heard one version or another of this Biblical quote. At least if you grew up in Europe.

Last March, news in Europe were all about „double standards”. Central and Eastern European countries have pushed for a while for regulations to address the practice of „dual-quality foods”, identically branded products being sold with different ingredients in different markets. They said this amounted to them getting more inferior products than those in the West. Back then, EU negotiators worked hard to reach an agreement on rules to handle the issue.

“It’s the first time … that this is actually recognized,” a Commission official said at that time. Which is quite a shame if you take into account that Eastern European countries have long complained about the practice and many studies confirmed their claim (in the case of Iglo or Coca-Cola, for example). And the long fight didn’t improve the already declining approval rate of Brussels.

But it’s not just about food or products. The accusation of „Double Standards” surfaces very often and in many contexts when it comes to East vs West in the EU.

First (and probably most important) among these is the case of corruption.

Romania and Bulgaria have often criticized the EU for the CVM mechanism, in theory set up to encourage efforts to root out corruption. It’s not that these countries have no problems with that. Romania might have a corruption problem. Bulgaria might have a corruption problem. (And, as for the other hot potato, Poland might have a problem with its judiciary. Hungary might have problems with the rule of law.) But it is not only them, Austria might have issues with corruption (think about the Strache-scandal). Germany might have issues with corruption or tax avoidance (think Panama Papers, Paradise Papers, Luxemburg Leaks, you name it), not to mention the Volkswagen scandal. Just to name a few. Yet they, Romania and Bulgaria are the only ones to receive „special treatment”.

Or, if one is to criticize the Polish/Hungarian/Romanian etc. governments for their approach to „freedom of the press” he should ask the question, why the events of 2015/16 New Years Eve in Cologne (and in Hamburg, Dortmund, Düsseldorf, Stuttgart, Bielefeld and Frankfurt) were reported only days after?

The latest issue of (perceived) double standards is that of the two Central European commissioners, rejected by the judiciary committee. I don’t claim that they are innocent in the matters they are accused with. Honestly, I don’t know.

But it’s telling that the von der Leyen commission was dubbed by Politico as the „innocent until proven guilty commission”. And not only because Rovana Plumb and Laszlo Trocsanyi.

Both in Brussels and in their home countries, other nominees of the Commission face investigations and parliamentary inquiries. Sylvie Goulard is accused of stealing 45,000 euros. Janusz Wojciechowski is under investigation for irregularities in travel expense reimbursements. Ursula von der Leyen herself faces an inquiry by the German parliament over misspending and mismanagement at the German Defense Ministry.

If Brussels (the EU, the Parliament) wants to avoid accusations of double standards, other nominees should have been rejected or subjected to more thourough vetting, too. Otherwise Central European govermnents (and people) can easily claim that they were handled differently.

And, just a sidenote at the end: The EP should not sacrifice real debate and real issues on the altar of political infighting, either. Because this practice further enhances the notion of double standards, hypocricy and alike. Isn’t it funny, that Mr. Dacian Ciolos (Romania) found Ms. Goulards (member of his own political family) explanations acceptable, because „it became clear to him that she respected the EU’s rules”? But– interestingly – he couldn’t accept the explanations of Ms. Plumb, who’s PSD party is at odds with Mr. Ciolos’ own party back at home? And vice versa, members of the Socialist group exonerated Ms. Plumb why sharply criticizing (albeit not rejecting) the French candidate…

Christopher Tapp Follow
« Children of the world, unite!
A sede vacante in Brussels? »