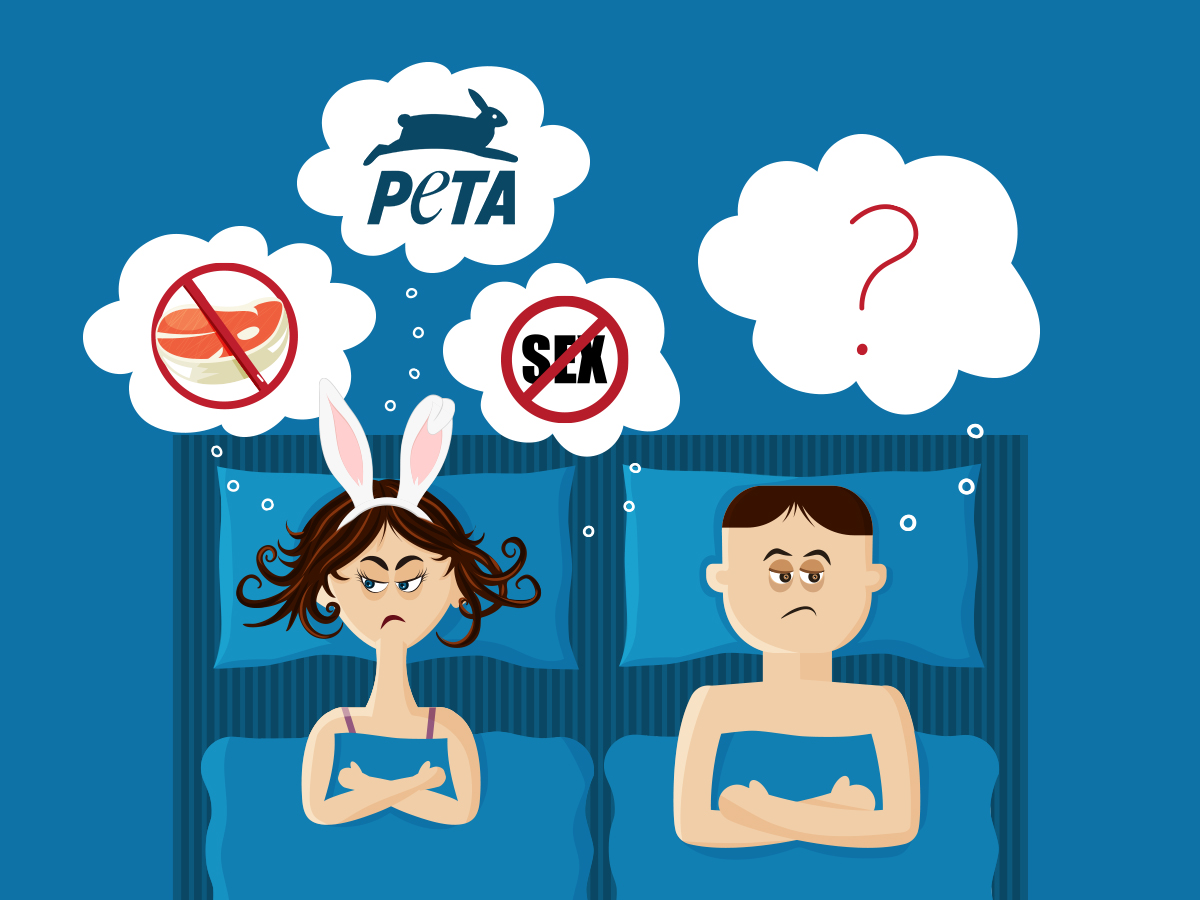 It was hard to notice among the millions of news on the conflict in Ukraine, and it was definitely nowhere near as important as any of those events, yet PETA Germany probably managed to alienate many of its possible or real supporters over the last week.

The message was simple and rather straightforward.

The targets were “suburban men with beer bottles in hand, brandishing tongs while cooking sausages on their expensive gas grills”.

The call for action aimed at their girlfriends and wives, proposing them a strike on sex with meat-eating men to persuade them to go vegan.

The rationale behind the call was that (based on a study, men contribute significantly more to climate catastrophe than women, primarily through their meat consumption. As the author put it, “their eating habits”, or as it was also called “their toxic masculinity” result in 41 percent more greenhouse gases”.

The proposal went even further, once again claiming that “every child not born would save 58.6 tons of CO2 a year”.

That’s just a little bonus, that the demand is based on an article published on PLOS ONE, a journal that, in the past faced severe criticism for publishing controversial and under-researched papers (like in the case of the #Creatorgate and not only because the typo in the title of that particular paper or the probably even more controversial gender dysphoria-research).

If even the editor-in-chief admitted that, as the main aim of the journal is to publish as many articles as possible, it is inevitable that papers make it through peer review that “in retrospect shouldn’t have” and if many authors had complained about their manuscripts having been reviewed by PhD students or researchers from completely different fields; well, maybe a two-step distance approach would be warranted.

Well, at least reading the comment sections of the news articles reporting about the proposal was fun enough to give a few minutes of distraction amidst the woes of the day. The reactions varied from mockery (“not meaning to be facetious about the average IQ of PETA brethren, but a vegan diet has been shown time and again to deprive the brain of key nutrients”) through moderately angry (“This ideology is as dangerous as Russia for Western civilization”) to completely outraged.

And there was basically none to agree. (Well, on PETA’s own page, of course, there was, but even that community wasn’t completely happy about it.)

While it is true, that agriculture is a large contributor to global emissions, putting the blame on men only is misguided and, as it was probably expectable, backfired.

Maybe a sex strike (a.k.a. using sex as a tool) had worked in case of wars (think 2003, Liberia, a step that in fact earned organizer Leyma Gbowee a Noble Peace Prize), but war was and is still overwhelmingly dominated by men, while it cannot be said that all women are vegetarians in Germany (or anywhere else in the world). Should their vegan partners also refuse sex?

If yes, why PETA didn’t feel it necessary to address them, as well? Or all those people on the gender- or sexual identity spectrum, who are actually eating meat? Or if the strike doesn’t work, should they break up instead, and just like in the worst periods of religious wars, vegan date only vegan and meat-eater only meat-eater?

This was one among the statements in the more moderate reactions, as well. UK’s Conservative Alicia Keans called it a “sexist assumption”, comparing it to the worst narratives of the ‘90s, something that “was incredibly focused on straight relationships”.

Of course, facing the outrage, PETA quickly retracted, claiming that the proposal was meant “to be a conversation starter” or, as another leader put it, “a tongue in cheek question”, adding that “we really don’t care about your sexual lives”. It probably didn’t help, that once again, it was stated that the aim was to get “meat-eating men to sit up and take notice”.

Well, as of now, no real conversation was started, in fact, once again, the issue was turned into an ideological-slash-emotional debate, not to mention the other (sexism, gender, etc.) issues that got mixed into the already boiling cauldron.

Debate is absent, there is only quarrel, mockery and ridicule, just like it happens in most cases when PETA tries to apply “shock therapy”. (Not to mention the rightful question, how is one, from now on, to differentiate between those statements of PETA that are meant to be serious and those which are “conversation starters” only?)

A solution for cutting back emissions didn’t get any closer, just like the solutions for any serious issue (let it be the question of Ukraine, the rule of law, gender inequality, the problems faced by non-binary people or other minorities, let them be ethnic, religious, sexual) did not, when emotions and ideologies were added into the equation.

Instead of reasons, arguments and compromise seeking attitude, the scene shows a great resemblance of Gulliver’s Lilliput, where the “Big-Endians” and the “Little-Endians”, whose quarrel led to “six rebellions … wherein one Emperor lost his life, and another his crown”, argue about on which end one should break up their boiled eggs, and neither party is willing to compromise.

Leslie Zelinka Follow
« To ship or not to ship
The trenches have been dug, the circles are closing »