Why the EU should maybe reconsider its attitude towards walls 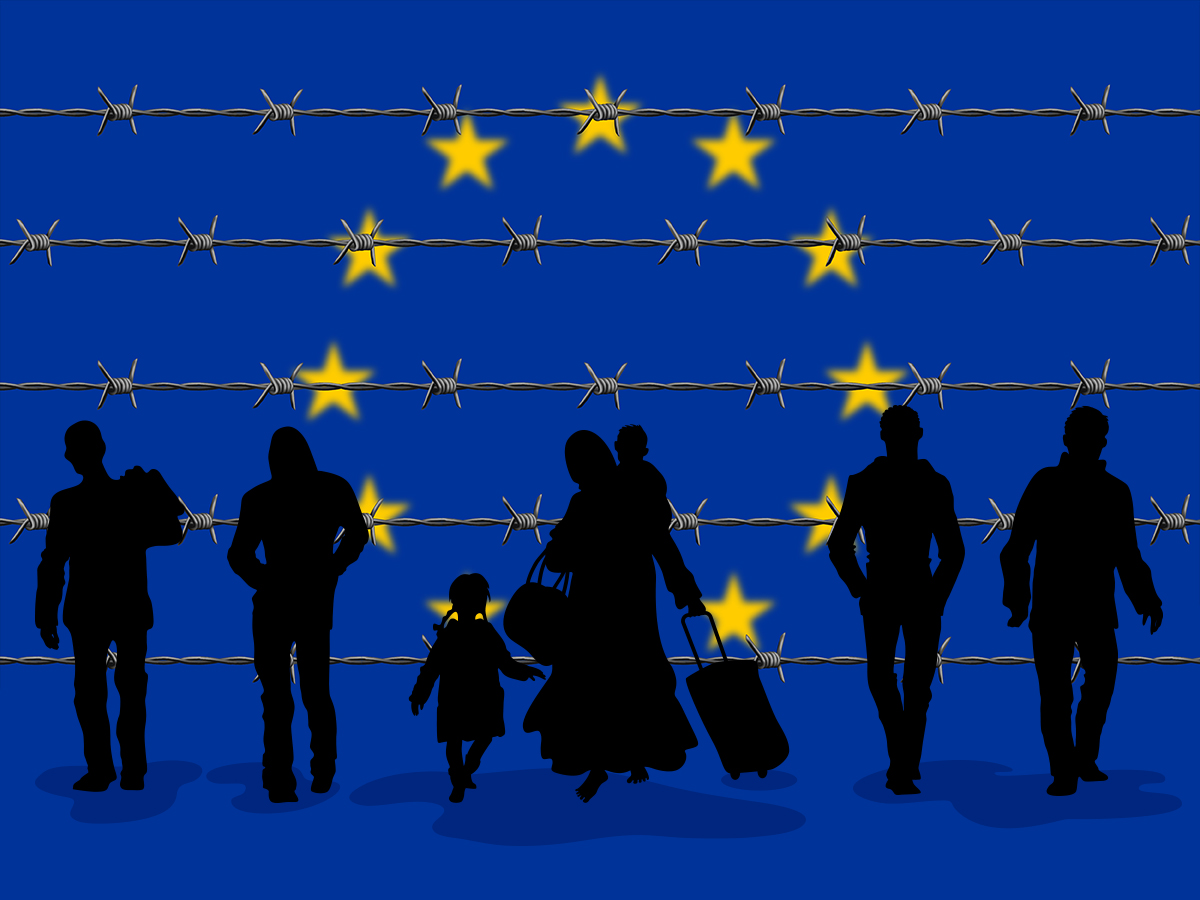 As the fourth (third? fifth?) wave of COVID hit Europe and as all eyes were fixed on Glasgow, a little tit-for-tat in Brussel was hardly noticed by the media.

On October 28, Commission Vice President Margaritis Schinas said, that the European Commission was ready to support member countries in strengthening the bloc’s external borders against “the hybrid threat” posed by international migrant flows, but doesn’t want to pay for the construction of physical border barriers, claiming that security coordination and technology was better than “cement and stones”. By coordination, he meant setting up command centers and by technology, thermal cameras, for example.

Well, at least he proved that as a Commissioner, he is truly independent from the country that delegated him, because surely, the Greek government said it differently.

So did Denmark, Hungary and 9 other member states, who asked Brussels to finance a physical barrier with EU funds.

Poland has just recently approved a €350 million budget to build a wall on the border with Belarus, to keep migrants arriving from that direction out. In a rare twist of events, Manfred Weber (EPP), who wouldn’t hesitate a second would he get a chance to attack the Hungarian or Polish governments, agreed with them, calling the opposing factors (e.g. Schinas, but also Commission President Ursula von der Leyen) “naïve”.

Protecting the self, the family or the tribe was, is a basic instinct, probably as old as humanity. Nobody knows who built the first wall, but as of today, the walls of the ancient temple of Göbekli Tepe in Turkey are considered to be the oldest, about 11,000 years old. Jericho and Uruk are in competition for the second place. All in all, walled cities were definitely around as early as 4500 B.C.

After that, there were many to follow the example. Some are more grandiose or famous, like the Great Wall of China or Hadrian’s Wall in England, others less known or less lasting, like the Great Wall of Gorgan, built by the Parthian Empire or the structure that gave the name to probably the most famous street of the world. (Think Wall Street.) There were a few, who went maybe a little overboard, like Nebuchaddnezzar II, who built not one, but three walls around Babylon.

The logic behind those efforts was the same.

To defend. Those, who wanted to conquer, tended to invest in armies, carriages and ships.

Walls were meant to build a barrier, a means to observe or stop the enemy, to provide an elevated vantage point to the defenders. Or in the case of fences built between private houses, to keep insufferably annoying neighbors away.

And let’s not forget that not every enemy was human. The greatest wall builders of Europe are, no questions, the Dutch, who built … a whole ocean to defend themselves from all the water coming from Mexico. (Ok. That was a joke. Watch America first, the Netherlands second if you haven’t heard it, yet.) But they did build an extensive set of dams, including the 32 km long Afsluitdijk, to defend what was their own. Try to reason with them that walls are not good means to protect land or convince them that they should use thermal cameras, enhanced evacuation systems or better pumps instead.

In either case, the wall was there to enhance the comfort, wellbeing and sense of safety of those who were within.

Surely, ever since the first walls were erected, there were always people who tried to cross them without the consent of the builders. Digging tunnels, climbing ropes or using giant, wooden horses as decoys. (Think Troy.) Many succeeded in their endeavors, just like many succeed now on the US-Mexican border. (And surely, would an outer-Schengen wall be constructed, there would still be some, who’d try to cross it.) When the success was achieved not by an individual or a small group, but by an attacking army, it was often one of the first measures to tear down that wall, to stop further self-defense.

So, it is unquestionable that walls not always fulfilled their intended goals.

But with this logic, we should dismantle the police, since they can’t always catch and arrest the perpetrators of crimes. We should stop punishing criminals, since humans tended to break social rules since the beginnings of times, no matter how many heads were chopped down or how many were slowly baked alive in the Brazen Bulls. We should allow others (think China) to freely spy upon us, or rather just have all our technological secrets out in the open, since (at least according to the Bible), Moses has also sent 12 spies to discover the land of Kanaan, no matter what the Canaanites tried to stop him/them.

All in all, while it might be questionable, to what extent walls built against invaders fulfilled their intended purposes, one thing is certain.

Despite the claims of some, there was no wall in history that would have stopped legitimate trade or good neighborly relations, exchanges of ideas or the spread of culture. On the contrary, as the old English proverb says, a good fence makes good neighbors. When rights and obligations are clearly defined, when boundaries and expectations are set, unambiguous and accessible for all, then human contacts, hence civilizations tend to flourish.

And walls were there to protect them.

Just like our own, very human, protective layer and robust outer-defense system (our skin), there was no wall that had no entry points: gates or crossings. That’s one attribute of a good fence: keeps out the harmful, yet lets the beneficial in.

Whoever came with good intentions, were let in. Even if the Great Wall is not visible from space, the most famous wall builders of all time, the Chinese are famed for their hospitality. So were the Romans, sitting on their seven hills behind their walls and welcoming everybody who took the oath in front of the altar of the gods, to keep the city’s rules.

Then why is there this aversion towards walls?

Much of how the Europe of today, well many in the world formed (form) their approach to walls is based on the terrible memories of the Berlin Wall and other walls that were the products of the bipolar world. On the trauma it caused to a nation and to families; dividing something that should have been one, forcefully and without much warning, into two.

Nowhere else where border structures similar to that one built within the Eastern Bloc of Europe, but there where barbed wire fences, even landmines everywhere. Rumor has it that Romania’s Ceausescu had even planted razor sharp objects in the Danube, trying to prevent would-be defectors from fleeing.

But those border structures, walls and guards had another purpose.

As John F. Kennedy put it, “Freedom has many difficulties and democracy is not perfect, but we have never had to put up a wall to keep our people in”.

The Berlin Wall wasn’t built to prevent the mass migration of desperate West-Berliners into the eastern parts. The other walls weren’t much different either. Between 1988-89, the Romanian-Yugoslavian border was the bloodiest in Europe (the second was the Bulgarian-Yugoslavian), as desperate Romanians tried to flee the brutal oppression of the Ceausescu regime.

Those walls were meant to keep people in. Forcefully. Against their will.

But it should be seen that not all walls are equal.

Just like not every people who try to cross the borders are equal.

Would border walls be built around the EU, it would still be unlikely that whoever would want to leave the Bloc would be shot at the border, or tried as a criminal. There are easy and legitimate ways to do it, hence there’s no need to sneak through/under/over the fence in the middle of the night.

Whoever would want to come with good intentions and in a rightful way should and would be let in, that would be the purpose of the gates on the wall (a.k.a. legitimate border crossing points). That’s why the EU needs (would need) clear and well-defined immigration rules; and enough contact points in regions or countries outside the EU to process the requests. So whoever wants to come and meet the reasonable set of requirements, can do so.

On the other hand, whoever tried to rent a flat in Brussels or Berlin, for that matter, knows that not every newcomer is equal. Many friends from university or from journalist circles could tell long stories about how they needed a native Belgian (sic!) to vouch for them. There is a reason behind the existence of Molenbeek. It is hypocrisy, sort of, to claim that we welcome everybody when we clearly don’t. And we are still talking about people who had a right to be in, who came to work or study using legal ways, paid social security and taxes and not those, who tried to come illegally.

One could argue, that a good, more effective-than-now deportation-slash-expulsion system could suffice, but evidence contradicts it and it is more of a damage control than prevention, anyway. A recent (September 2021) ECA report states that of the 500,000 people who have been ordered to leave the EU since 2008, only 29 percent were finally deported, and only 19 percent of those who entered from outside continental Europe. That means three out of four can stay. It would seem that it is worth the risk. And the 500,000 since 2008 means about 38,400 a year, which is very likely only the fraction of those who entered illegally.

It would need a 300 percent improvement to expel those who’d been identified so far. Sounds more like wishful thinking than a realistic alternative.

To paraphrase Sir Winston Churchill, a wall is the worst form of defense except for all those other forms that have been tried from time to time.

Marta Loeb Follow
« Who will pay for the gas bill?
A few thoughts on the COP26 conference »