European energy supplies revamped by the end of the year? But at what price? 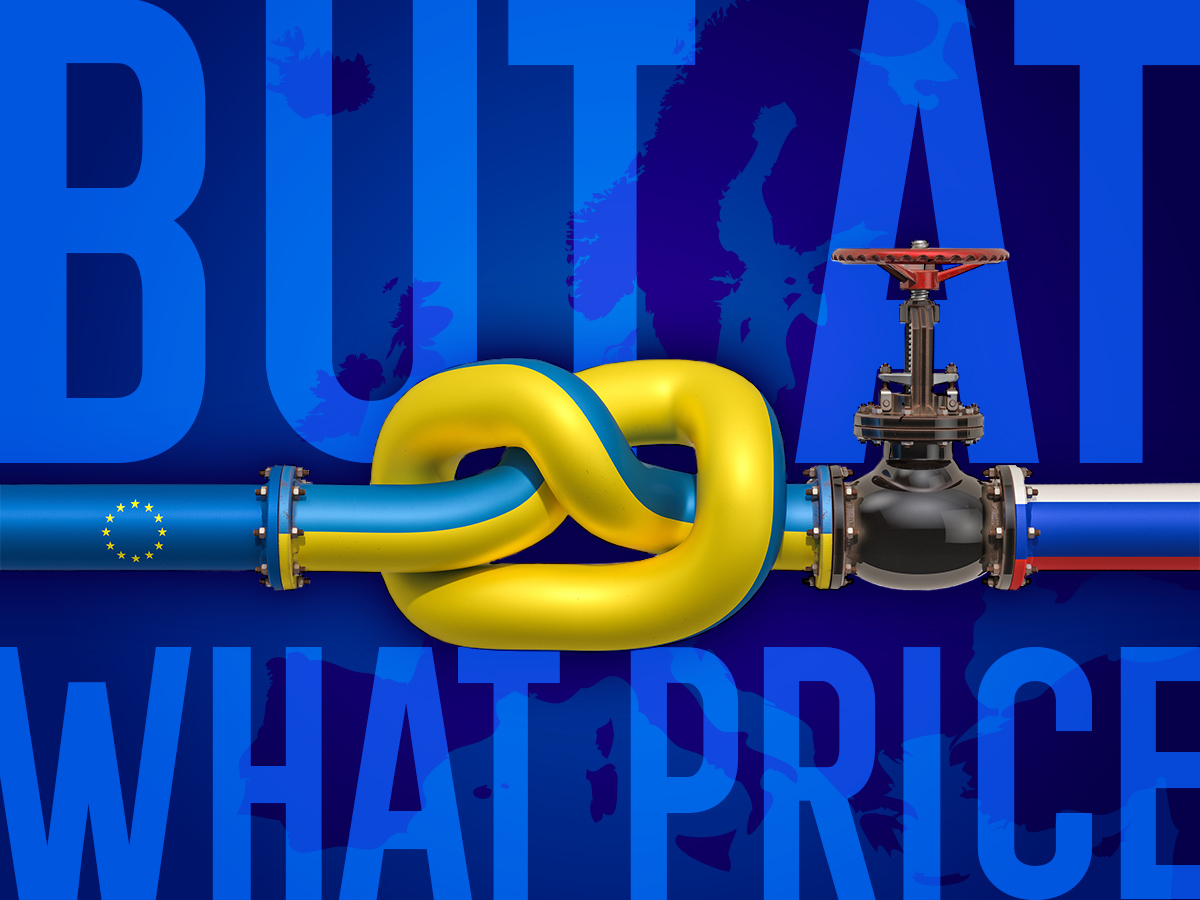 If staunchly anti-nuclear Germany contemplates prolonging the operations of its nuclear power plants (even if it is unlikely to happen, due to a bunch of reasons) and is, at the same time, thinking about halting the phasing out of its coal-fired power plants, then you know that something is to change.

March 8 came with the announcement that Europe was planning to slash consumption of Russian natural gas well before the previously planned date (2030), in fact by reducing it by 66 percent in 2022 alone. As European Commission President Ursula von der Leyen said in her statement, “We simply cannot rely on a supplier who explicitly threatens us.” As did, for example Russian Deputy Prime Minister Alexander Novak, who threatened Germany with turning off the Nord Stream 1 pipeline, would international sanctions directly target the energy sector.

As of now, the EU refused to ban Russian energy from its market, as this step is totally (and probably understandably,) unacceptable for some member states, because of heavy reliance. German Finance Minister Christian Lindner said, for example, that renouncing Russian energy imports would mean that “prices in Western Europe and around the world skyrocket due to the expected scarcity”, while Markus Söder, state premier of Bavaria warned that an import ban would mean “it could become very cold and expensive” in Germany.

This didn’t stop President Biden from announcing a ban on Russian oil, natural gas and coal imports to the United States, a mainly symbolic gesture, given the low market share. The UK plans to phase out those products by the end of the year, without actually banning them. They also have much more diversified resources, depending much less on Russia than the rest of Europe.

The ban became public almost at the same time as the news about a European plan to jointly issue bonds on a potentially massive scale to finance energy and defense spending. In the time of writing this article, not much is known about the details of the plan, well, according to Mr. Frans Timmermans, there is “no official plan”, as of now. It is unlikely that any resolution will be reached this week, given the complexity of the issue, but the very fact, that there is an ongoing debate about it, is a telling sign.

“Tens of billions of euros will be needed to strengthen European defense, to not rely on the US and to be self-sufficient in energies, to be independent of Russia.” Slovakia’s finance minister, Igor Matovic said. “Joint EU bonds are the way to go – Slovakia will surely need a helping hand from richer European countries, we can’t do it ourselves.”

Financing green transition has been a source for debates even before the pace of the process had to be accelerated.

If not with (French-championed) bonds (or the other proposals currently on table, like the suggestion of Greece on price caps and related market interventions), it might be possible only with much more lax fiscal rules.

There was already some opposition to this from the notoriously frugal Netherlands, where Finance Minister Sigrid Kaag has warned against watering down the EU’s borrowing rules by stripping out defense and other strategic investments, claiming that the EU needed to keep its eyes on debt sustainability even when facing the economic challenges posed by the war in Ukraine. The Hague is said to be open to some discussions about reforming the Stability and Growth Pact, but is against completely removing those two titles from it.

She should maybe ask the French and the Germans about it.

It is not just energy transition, but all sorts of strategic choices need to be revisited in light of the war on Ukraine, from getting vegetable oil to selling European products.

The price tag attached would be one that is difficult to digest.

As about 55 percent of Germany’s gas imports, 50 percent of its coal and 30 percent of its oil import comes from Russia, radically cutting that umbilical cord would create an enormous burden on German industry and energy sector.

There are several steps planned to mitigate the effects, starting from changing legislation (like that on the expected level of fullness of gas storage facilities or another one that is meant to help transition to renewable source by 2035, due to the “overriding public interest”) and starting to build not one, but two LNG terminals in the North, and including such controversial issues as the halt of the nuclear phase-out, and with special emphasis lying on renewables, that are to be the backbones of new European independence. (Strategic Freedoms, as German FinMin Lindner has said.)

The theory that clean energy transition would help to diminish European dependency of Russia is a legit and very much welcome one.

But the trick would be to find a way that meets three goals at once: securing supplies, protecting households and businesses from already soaring energy prices and meeting the climate targets. And does this within an extremely short period.

Mr. Timmermans said that it would not be easy, but “it’s feasible.”

It seems to be a task akin to finding the Holy Grail.

It might be easier (and for that way, it is more likely), to focus on two of the three, the question would be which one should be sacrificed in the short term.

Less than a year ago, there were voices that thought that even the Fit for 55 or the 2030 goals were more wishful thinking than reality-based strategies. And those concerns were raised while German plans for the transition period relied heavily on natural gas. Now, there are voices suggesting that the EU climate targets should be reviewed. Like Dennis Radtke (CDU, Germany), who said, “We cannot, when we call for the hard cut with Russian gas and coal, pretend that this has no effect on previous climate policy plans”.

It is yet to be seen, how much of the new, green plans would actually prove viable or how much of the bravado is a counter-attack against subsequent Russian threats of cutting off the supply of gas via the Nord Stream 1 pipeline to Germany (and on other pipelines to other countries) in retaliation for the sanctions or for blocking the exports of Russian oil.

Even if it is likely that it will have a different sort of a price tag attached.

In the forms of bonds, for example. Or much laxer financial rules and increased borrowing on the member state’s level. (Not to mention the competition rules, also under scrutiny now, giving some room of maneuver for the embattled European industrial sector.)

German FinMin Lindner had already faced criticism over his move to take about 60 billion euros from funds earmarked for pandemic recovery and use it for climate projects. Increased spending in the energy sector, combined with Chancellor Scholz’s commitment to inflate military spending and with the government’s determination to keep a lid on skyrocketing energy prices; add to this the effects of a very likely global recession looming on the horizon … these conflict over notoriously strict German budget priorities.

Everything else linked to the transition needs time. Probably much more than planned.

The best prognosis is to have the LNG terminals built in two years and have an approval procedure much quicker than it would take normally. (Up to three years before the Ukraine crisis.) If, of course people could be convinced that it is not dirty, after all, despite having been criticized for years, because it is produced by environmentally harmful fracking) And that is a best-case scenario, not one disturbed and delayed by problems in the global supply chain.

Until those two terminals are up and operational and are connected to the rest of the German energy grid, Germany would have to import supplies through one of the other European LNG terminals (21 currently), raising the costs even more.

Not only or not necessarily advanced one. But if anybody has tried to build or to renovate a house in Germany during the last couple of years, they know that the country doesn’t have the numbers of plumbers and electricians and other blue-collar workers needed, to produce and install the devices. Not to mention the materials and equipment needed for an operation on that scale.

Because to achieve full green electricity by 2035, capacities will have to be expanded enormously. Wind energy, for example, should get doubled to 110 gigawatts. Solar energy should be tripled. And people, who had, so far, successfully opposed wind turbines in their neighborhoods should be convinced. And so on.

Luckily for us, thanks to a freshly published research, now we have scientific proof that natural gas is dangerous for us on a personal level (because of the methane and CO2 emissions of gas stoves, cooktops and ovens), not only for the planet as a whole. https://pubs.acs.org/doi/10.1021/acs.est.1c04707

This might make the transition easier to bear, knowing that though we might have a triple (or more) sized energy bill, but our loved ones would be safer.

Or not, if we return to nuclear or coal, both the scapegoats in the last decade or so.

Luckily for us (again) yet another research got published just in time. If we are more ready to believe to Bruno Burger (Fraunhofer Institute), whose new studies suggest that hard coal plants could replace gas capacity without additional strain on the climate, because the methane emission is lower than in gas production. He even claimed (for FAZ) that “for the climate it’s almost irrelevant whether we burn hard coal or gas”.

A very much welcomed finding in many places.

Christopher Tapp Follow
« It’s time to unite to protect the common interests
And, the winner is … China »