Entering the guessing game: predictions about the future of the world 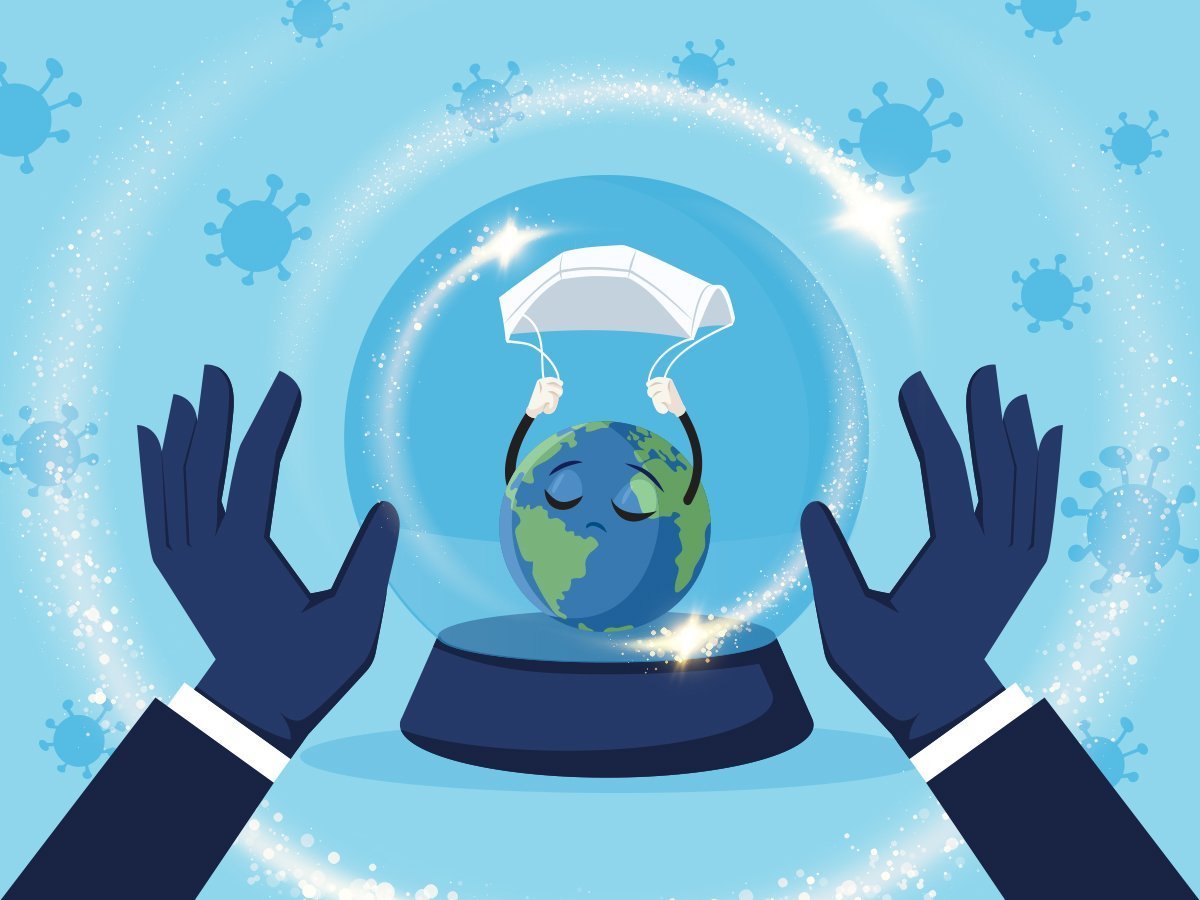 The only thing we know about

the future is that it will be different.

Celebrating the first digital/virtual Easter ever in silence and quasi-solitary confinement provided time and opportunity to ponder, read and write. And I was surprised by the sheer amount of available predictions on how our world will look like after the pandemic is over. Many predict less travel, less office work and more home office, a more conscious living, a cleaner and greener future. Others predict doom and foretell further pandemics, more lost jobs, less available food, less consumption hence less economic growth all around the world. Some joke about the fact that Western countries have fought for years against garments covering the face (burqas and co.), now you are considered a mass murderer if you venture out without a mask. And it goes on like this.

Different for sure, but to what extent? Of course, your guess is just as good as mine or everyone else’s. First, because the pandemic is far from over and who knows, how long it will last, and second, because the future is quite difficult to predict, or as Walt Whitman put it “The future is no more uncertain that the present”.

Yet, as there is not too much to write about (save the ongoing saga of EU budget quarrels) I might just give it a try, from a geopolitical point of view.

Economies are badly hurt. As of now, less going out means less consumption, that means less production. Yet, this might change and as long as governments manage to keep most of the people above  surface (even if it means giving them money without work, i.e. a form of minimum income for everybody) and the actual fear of losing your livelihoods is mitigated, consumption will rise. Many still hope that our economies will bounce back quickly with a few, hopefully not-too-deep scars.

On the other hand, the pandemic will show, to what extent and for how long the Trumpian “America first” doctrine is sustainable. It has already hurt the mutual trust on the two sides of the Atlantic. The quarrel over a shipment of masks, originally due to Berlin but somehow disappearing in the process is a clear example of this loss of trust. But if the countries on this side of the ocean don’t trust Washington, how will they accept its leadership? Or if the US loses or gives up willingly its famed position as “the leader of the democratic world”, who is able and ready to take on this job? Leadership is not only based on economic and military power, but also on the ability and willingness to coordinate and harmonize international reactions to any given crisis. The US decided to fight this pandemic alone, e.g. by closing its borders to European citizens  unilaterally and without any previous consultation. But this might also change its abilities to lead in other situations.

The EU could fill the gap. The von der Leyen Commission started its work with great ambitions, like a more effective and visible geopolitical role for the EU. Alas, the last couple of weeks have clearly shown that Brussels and the capitals are not able to react quickly and efficiently to a crisis, let alone coordinate work on the global level. And it is likely to remain so with no sign or, in fact, will to create a more effective structure. On the contrary, the pandemic clearly enhanced the role of the national governments. Furthermore closing the borders of the “Europe fortress”, as Yuval Harari put it in the Financial Times, sends a message similar to the American one. The “EU first” doctrine might put European leadership in question, especially in its closest neighborhood, should another crisis come. The last couple of weeks have shown that EU cannot even “defend” its “backyard”, its closest neighbors on the Balkans from Chinese intrusions, as Serbian President Vucic’s declaration  made it obvious, where he called Chinese President Xi Jinping his brother and friend.

The American and European “retreat” leaves ample space for China to fill the vacuum. Being the first to defeat the virus with Draconian measures (even if this claim might not be 100% accurate as the growing number of new cases shows), the country has started a global marketing/communications campaign, advertising the effectiveness of Chinese governance and politics, medical care and others. Just as the US used the Free Europe radio to distribute its views, now China uses every available form of mass media to share Chinese best practices on caring for the sick, organizing the lockdowns and such. The country also provides aid and supplies for countries in need, especially for those who cannot hope to acquire Western help, like Iran and Iraq. Of course, it is yet to be seen, how long this will last or how effective the Chinese “offensive” will be, but with the US preoccupied with its “America first” doctrine and the EU and Russia being out of the “big game”, it might succeed. For the last few decades China has been continuously working on enhancing its influence and leverage in Asia, but also in Africa, willing to offer aid and investment in places were no European country would set its foot. This, coupled with aid during the pandemic that is yet to hit Africa, might give China a chance.

This is a bad possibility for Europe and the Western efforts to build democracy elsewhere in the world. China offers a different, alternative model of governance and economy with more carrots and less sticks, in contrast with European investments, that are most of the time linked to democracy building efforts, anti-corruption measures and such.

The question of course is, how badly Africa will be hurt by the pandemic. It is not such a wild guess to think that the continent will be hit pretty badly, given the generally low level of medical care and the high level of poverty. This might wipe out much of the political and economic development of the last few decades, which on the other hand, might increase the migratory pressure, forcing Europe out of its snail shell and intervene.