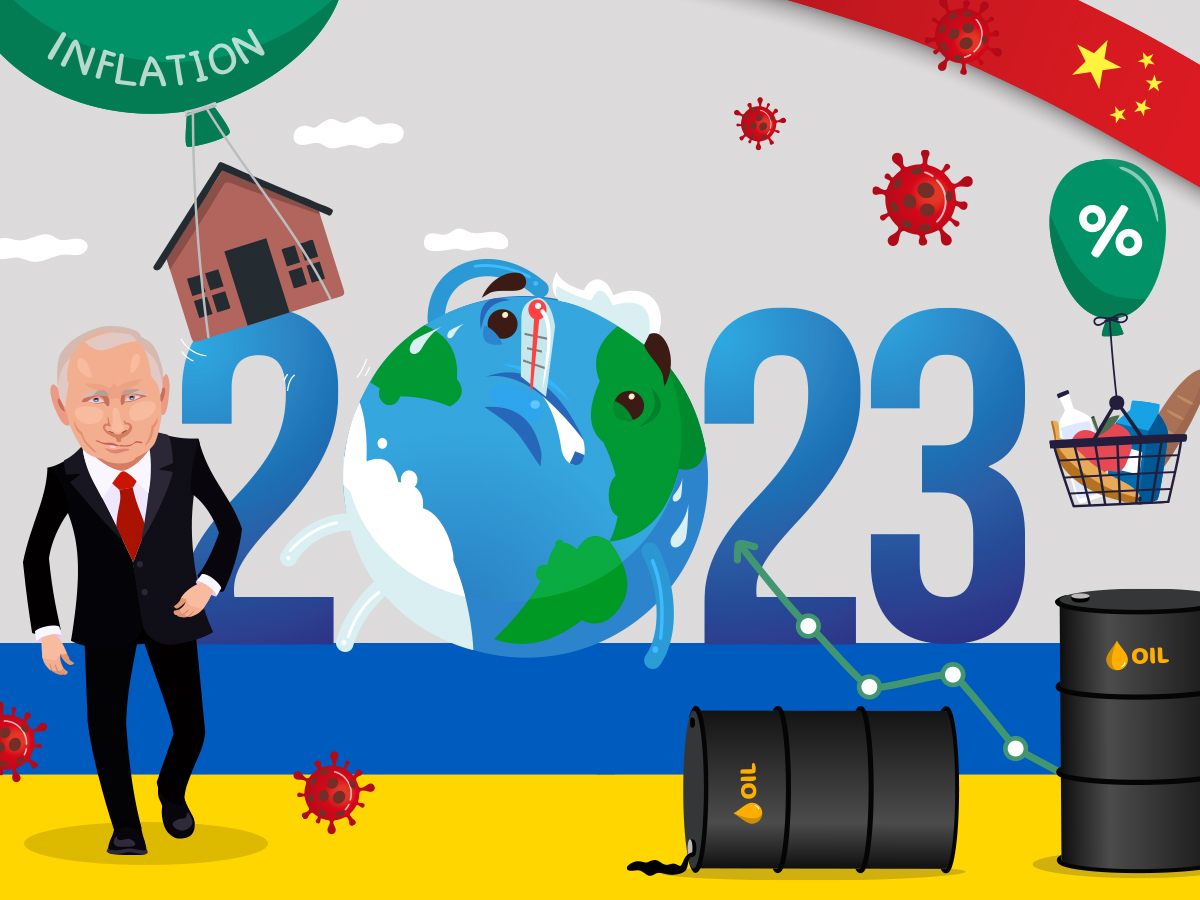 From prolonged pre-2024 election season in the US to rising tensions all around Asia and the Middle East, the world faces a host of conflicts, not to mention the high likelihood of global recession and an ongoing energy crisis.

All that is very likely rendering 2023 a turbulent year.

From European point of view, there are a few issues that will require close attention, with the war in Ukraine having an effect that reaches far beyond the battlefields.

If at the beginning of 2022, it was a relatively safe bet that tensions in Ukraine would escalate, even if only a very few experts could forecast the extent to which Russia was willing to go, it is almost as safe to say that at least a significant part of 2023 will be spent with war.

Conditions for a lasting ceasefire are simply not there and, given the opposing objectives and the ongoing war-of-words, are unlikely to emerge, especially not in the first few months, and a comprehensive peace agreement is even less likely.

This might change if one (or both) of the current leaders involved in the war would lose their positions, or would the situation on the frontlines start to bear great resemblance to the Battle of Verdun, with positions frozen and armies dug in.

Though probably not on the scale as it determined 2020 and the most of 2021, COVID seems here to stay and with fears of a repeated wave of highly contagious new mutant spreading across the globe, it is still worth to pay attention to the latest developments.

As of now, the threat looms mostly in and for China.

After years of Zero Covid, the country has just overturned the strict lockdown policies, much to the surprise of many. The sudden opening already sent COVID cases soaring.

Currently it seems that Chinese health system is not fully prepared to handle the crisis.

Despite that, experts have expressed optimism that even China might be able to return to the pre-COVID life by the middle of 2023.

It is difficult to predict, how the virus will change, though, if it will at all and how effective existing vaccines will be against such a new variant. Probably it won’t hurt to keep an eye on it.

The spread of COVID won’t be China’s only problem in 2023.

And China is poised to cause headache to Western leaders in many other ways, as well.

Its continued tacit (or not so tacit) support for Russia prolongs the crisis in Ukraine, and Beijing’s opposition to using nuclear weapons might not be sufficient would things deteriorate for Russia.

Though the risk of the all-out invasion of Taiwan is relatively low now, as it is hoped that Beijing learned the lesson from Russia’s disastrous invasion, it is likely that tensions will continue to rise in the region. China’s foreign policy is also expected to be more and more assertive.

The trajectory of Beijing’s relations with Washington is anything but promising, beyond territorial disputes also marred by a fierce scramble for resources, products (from energy resources through rare earth minerals to semiconductors) and markets.

The state of China’s economy is another cause for worry. The country plans to refocus on economic growth this year, but as the economy struggles and COVID wreaks havoc, it is yet to be seen, how effective the series of measures proposed by the government will be in supporting the property market.

No crystal ball is needed to predict that 2023 will be characterized by all sorts of energy crises.

While it is expected that demand for renewables will grow, along with demand for resources needed for the Green Transition (rare earth metals, minerals, etc.) and “Green products”, like electric vehicles; the market of fossil fuels will likely be volatile.

High demand will bring along high funding and increased state support, like the EU’s plans to launch the European Raw Materials Fund, an EUR 150 bn public-private investment initiative by early 2023.

Like we stated in the previous point, this pushes the US and EU further down on the collision course with China. Or can deepen the transatlantic rift between the US and the EU, both having opposing interests as regards to China and competing for the same markets. One of the questions to answer is whether the US is willing to go alone to an all-out economic war with China (like it more or less did with the semiconductors), irrespective of the wishes of its allies or there will be some compromise reached?

The fossil fuel market will suffer less from a surge of demand, rather from uncertainty and shifting buyer/supplier relationships. The interests of producers (high prices) will continue to collide with the interests of the buyers, who try to tackle record-high energy prices (and with that, inflation).

An issue to watch will be how the dispute over prices influences relations between the EU/US and the Middle East.

Soaring energy prices have hit households and businesses alike, not only in Europe that feels the direct effect of weaning itself off its biggest supplier; but all around the globe.

While most of the world is unlikely to experience blackouts and rationing (something that cannot be ruled out in Europe), the spill-over effects of the war in Ukraine (combined with the still lingering aftermath of COVID lockdowns) affect everybody.

The EU also faces economic downturn. According to the latest predictions, the GDP of the EU will decrease by 0.6 percent at the end of 2023. German economy is expected to shrink by 0.5 percent. Fitch Ratings went even further, stating that the termination of gas supplies from Russia would decrease EU GDP by 1.5-2 percent.

Inflation is soaring both in the Eurozone (18.6 percent in January 2023) and outside it, with estimates going up to 22 percent (in the case of the UK).

Given that the Ukraine conflict is unlikely to end in 2023, and even if it would, there will be no going back to “business as usual” with Russia, it is safe to predict that the EU will experience economic hardship all through 2023 and probably also in 2024.

Emissions are at record levels and with the focus on solving the energy crisis (thus countries relying on burning coal again), it is unlikely to radically change in 2023.

The fast transition to green energy (especially if fossil fuel prices continue to soar) might help to balance this, but given the growing global tensions, it is unlikely that global talks on the climate will proceed with great leaps in 2023, even if Brazil’s new president might take the right steps towards reversing deforestation.

COP27 will be followed by COP28 in the UAE. Until then, it is to be expected that many arguments will arise about who should pay to whom and how much while countries try to fill the framework accepted in Egypt with concrete details.