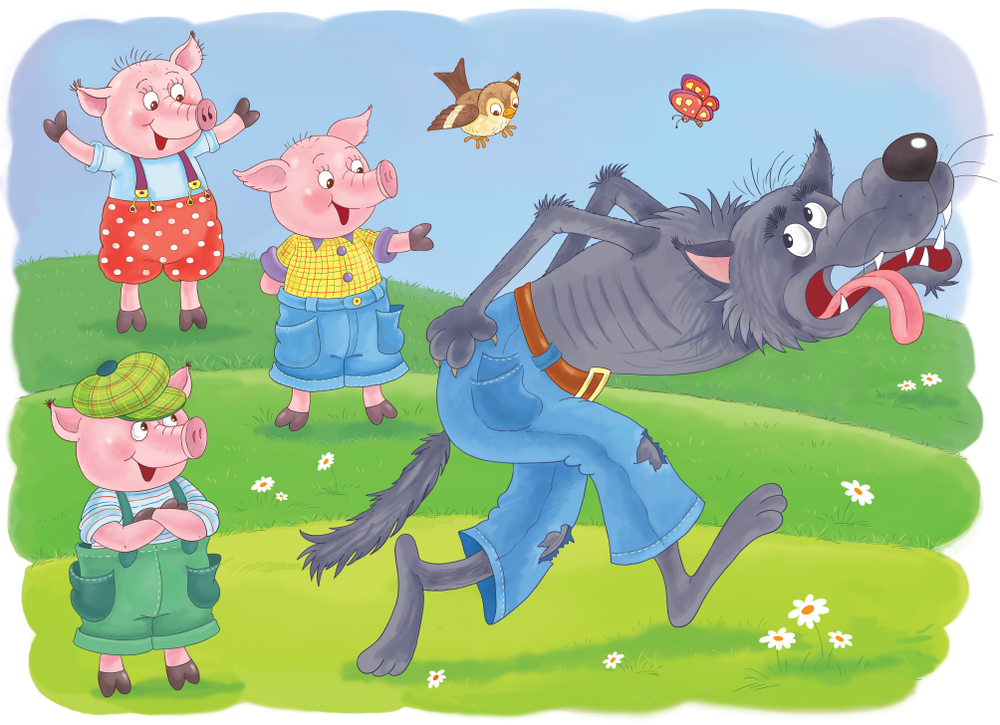 Once upon a time there was a mother sow who had three little pigs. When they grew old enough, the little pigs decided that it was time for them to leave the parental house. As they were preparing to move out, their mother gathered them together and warned them: “My little babies! Whatever you do, do it the best that you can, because that is the way to get along in the world. Remember that no matter where you’ll go or what you’ll do, you will always be brothers who must help each other. Don’t be selfish because someday you will suffer for being greedy and grabbing. Do so, or someday you will be sorry that you did not obey your old mother.”

She took a deep breath and continued: “And now one last piece of advice. You have heard me talk of our old enemy the big bad wolf. When he hears that you’ve moved from my house, he is sure to try and get hold of you, to carry you off to his den.”

But no words of advice or warning could cure the little rascals of their bad habits.

They soon found a nice, cozy place to live and jobs, according to their abilities and education. They agreed that each will keep his own salary but that they’ll put a tiny part of it into a common budget to cover the expenditures related to their house. The more fortunate brothers even gave in a little more than the others to help them out, just like their mother told them. And the poorer piglet tried his best to make use of the extra funds: enhanced his business and tried to level out the differences between him and his brothers. They also made sure that the wealthier brothers got some rebate from the common budget, just to ensure that everybody got their fair share.

I wish I could say that they’ve lived happily ever after, but being so different, they often quarreled, just like most brothers do. Very soon, one little pig decided that he’ll be better off without his brothers. After much hesitation and even more arguments, he finally left them on a snowy winter day.

The other piglets decided that the time was just perfect to revamp their house. It became old and somehow outdated in the course of the last years.

So they went to an architect and told him: “We want to have a sustainable, shiny, modern new house, with zero carbon emission, or even better, self-sustaining. We’re dreaming about clean water, electric cars, no coal heating, and a wind farm.” The architect gave a nod, but warned them that though he will be ready with the plans within a week but a house with such parameters will cost a small fortune. He suggested that they reconsider their budget and that maybe they should increase their commitments.

“What???” – shrieked the wealthier piglet, and started to shout: “I’m not willing to pay more than my fair share of 1%. I’m already paying a lot to the common budget and also to my brother to help him with his business.”. The other piglet tried to argue that with their third brother gone, a large hole appeared in their budget even without having those ambitious dreams about a better house. The rich piglet suggested that they’d rather cut back on the funds he gives to the poor one. Then, of course, the poor piglet resisted and demanded that the rich little pig’s rebate be cut back. They argued about finding new revenues but were unable to agree where those should come from.

They argued and argued. The more they argued the more urgent the decision became, because the old house started to fall apart. So, in the end they decided that they use the available budget, without raising the commitments, but also without reshuffling the funds.

They went back to the architect who warned them that with so little funding, the house won’t exactly be like the one they dreamed about, but the wealthier piglet was unrelenting, he was not to pay more. So the architect did his job, even hired some workers and built the new house for the little pigs.

Soon, they arrived to their new place. And behold, in place of their shiny modern house there stood a shed, entirely made out of straw. They ran to the architect, but he sent them away: “I’ve told you: a low budget takes you only so far.”

So, the piglets moved in their new home. It was sustainable, you can bet, but it was also small and uncomfortable. They didn’t dare to use coal for heating, so that part of their dream came true, too. But there was not enough space for their businesses, either and with the budget so tight, they quarreled even more.

Just about that time, the big bad wolf arrived to the neighborhood. He quickly discovered the straw house and the piglets inside. But he was sly, smart and slick. He stood at the door and knocked: “Let me in, let me in, little pigs or I’ll huff and I’ll puff and I’ll blow your house in.” “Not by the hair of my chinny chin chin”, answered the little pigs.

But of course the wolf did blow the house. It was worse than hurricane Brian: total disruption within a second and the piglets could barely escape!

They ran back to the architect and demanded that he built them a better home. Now, they we’re a bit more flexible, each giving up from their previous demands. The rich one agreed to diminish his rebate, while the poor one accepted that the rich gave him less funds. They even agreed that the diminished funds could be used more flexibly by the poor one to better meet his need. Yet, they were still reluctant to raise their contributions, especially the rich one who still thought that he’s paying more than he’s actually receiving.

“All right”, said the architect. “I can build a better home for you with this funding. But beware: if you don’t want to commit more, the results might still not mirror your dreams.” But the piglets didn’t want to do so, so the architect sent them away and started to design and build their house.

Soon, it was ready. The piglets prepared to move in. This time, the house was made of wooden planks. It looked better than the previous one, but it was still a far cry from their shiny, sustainable, zero carbon emission magical house. Yet, this is how far their budget got them so they accepted it.

Very soon, the big bad wolf came to the house. He stood at the door and knocked: “Let me in, let me in, little pigs or I’ll huff and I’ll puff and I’ll blow your house in.” “Not by the hair of my chinny chin chin”, answered the little pigs.

Well, the big bad wolf started to blow. He blew hard and then he blew harder and not much later, the wooden house fell apart. The little piglets could barely escape!

Sweating, panting and totally exhausted, they stopped only on the top of the hill. There, the rich piglet looked at his brother and said: “I’ve realized that there is no other way. Just like our mother has told us. We should do our best because no other ways work. We shouldn’t be greedy, because that’ll only cause us trouble. I appreciate if you accept a little cut on your funding, I’ll accept the same with my rebate. And, if you’re willing to raise your contribution, I shall be happy to do so with mine.”

They went back to the architect and told him: “Now, we have the proper budget for our ambitious plans. Let’s build our environment friendly, modern home.”

And so they did.

The new house was really the best and most perfect house one could dream of. It was made entirely of brick, with large glass windows looking over the valley. The energy was provided by sustainable sources and all the little pigs businesses had their space and enough supplies. The piglets were really pleased with it and moved in the house immediately.

Very soon, the big bad wolf appeared. He stood at the door and knocked: “Let me in, let me in, little pigs or I’ll huff and I’ll puff and I’ll blow your house in.” “Not by the hair of my chinny chin chin”, answered the little pigs.

And the little pigs lived indeed happily ever after, though they still argued about budget issues from time to time.