A few thoughts on the EU-China deal 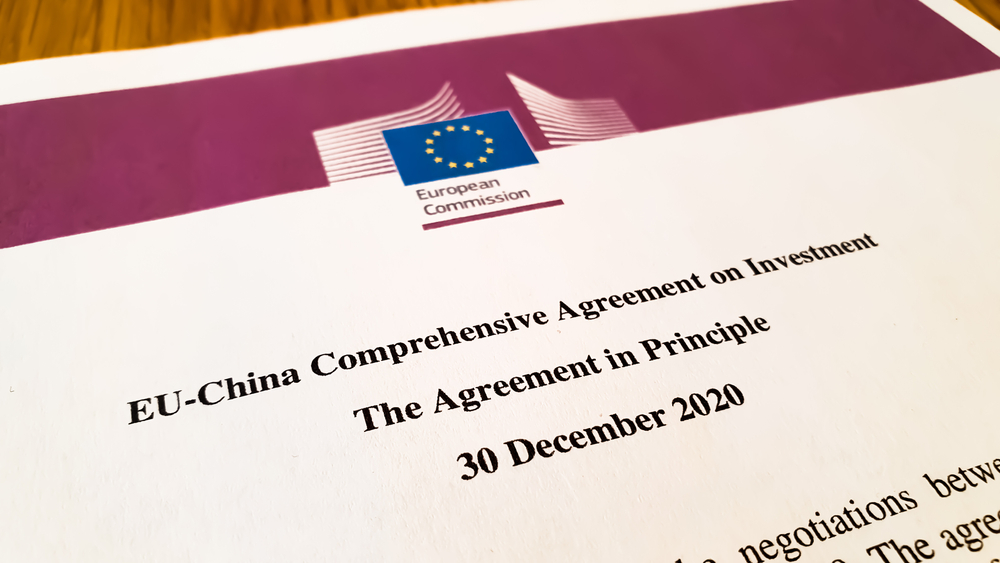 A few months ago, we wrote a lengthy analysis about EU-China-US relations, reasoning for a united front among EU members and the need of transparent and reciprocal rules for investments in or from China. For a mechanism that guarantees that every European country has equal chances to win Chinese investment if it wants to do so and for the power of the EU to be behind every country so it is not to be blackmailed by China. While Chinese FDI into the EU has increased exponentially over the last few years, the EU has its eyes on China, with the German automobile industry leading the way.

Well, on 30 December 2020, two days before the end-of-2020 target; the EU struck a political deal, officially called the “Comprehensive Agreement on Investment” (CAI) with China, after seven years and about 35 rounds of negotiations. The aim is to create a “level playing field”, though it is yet to be seen, how it will work out. Many fear that the process ends up being “business as usual”, with “China defecting and the EU cooperating”. On the other hand, the defenders of the agreement claim that China finally committed to open up to the EU in a number of key sectors and promised further cooperation.

Ursula von der Leyen said: “Today’s agreement is an important landmark in our relationship with China and for our values-based trade agenda. It will provide unprecedented access to the Chinese market for European investors, enabling our businesses to grow and create jobs. It will also commit China to ambitious principles on sustainability, transparency and non-discrimination. The agreement will rebalance our economic relationship with China.”

Trade Commissioner Valdis Dombrovskis was also positive, saying that the deal contained “the most ambitious outcomes that China agreed with a third country”, at least in terms of market access, fair competition and sustainable development. He also said: “We expect European businesses will have more certainty and predictability for their operations. We have some very welcome changes to the rules of the game, because for a long period, trade and investment relations with China have been unbalanced.”

If and when it enters into force, the CAI will replace the 25 bilateral investment treaties that individual EU members signed with China. First, though, the agreement needs to be ratified by both sides. In the EU, it means that first, a legal review, dubbed as “legal scrubbing”, needs to be executed by the Commission’s lawyers, who’ll correct the text. The new version will be translated to all of the official languages of the EU and then it can be signed, and only then comes the final step, since the European Parliament also has to approve the deal. This is a lengthy process, some claim that it won’t end until early 2022.

The first question regarding the new agreement could be: why the rush?

The agreed end-of-2020 deadline could have been easily postponed, citing COVID as a reason, for example. Certainly, getting the deal was on the to-do list of the German EU presidency, which ended on 31 December. Some even claim that the ratification of the agreement will conveniently fall into the same period as the upcoming French elections in 2022, and Emmanuel Macron’s bid for reelection with it.

Others claim, that the goal was, especially in Beijing, to reach a deal before Joe Biden could take over the presidency of the US and could start to pressure his allies in Europe for more transatlantic cooperation. That should be the reason behind Beijing’s last-minute concessions after seven years of slogging. From this point of view, the deal would be a strategic victory for China.

What about cooperation with the US after the agreement?

The views are differing here, too.

Incoming NSA Jake Sullivan sent a cautiously worded Twitter message to the EU a few days before the deal was accepted, saying the new administration “would welcome early consultations with our European partners on our common concerns about China’s economic practices”. And President-Elect Joe Biden has made it clear that China will remain a crucial focus of his foreign policy agenda, and he hopes to establish multilateral approach with the EU. The new deal and the European priority of strategic autonomy do not fit into a broader US strategy of countering China’s unfair market practices and human rights abuses.

But many view, that after Donald Trump signed a phase one trade deal with Beijing, and the Regional Comprehensive Economic Partnership was signed, the EU was or felt left out. Also, many of the concessions China gave to the EU have already been granted to the US as part of the above-mentioned trade deal. A deal the US didn’t bother to consult about with its allies before signing it. Furthermore, coordination and cooperation in any field doesn’t mean that one party could or should basically veto the agreements of the other. In fact, the EU could become a strong middleman between the two giants, if it has the appropriate tools and appetite for it.

As of now, some countries and some parliamentarians have signaled that they are dissatisfied with the deal. Officials from some EU members, like Belgium, Spain, Italy or Poland criticized the lack of transparency and the working of the “German bulldozer”, that prioritized the business interests of German manufacturers above the interests of the EU, or of the smaller member states, who might not be able to get as much or as beneficial investments from China after the deal. Polish FM Zbigniew Rau went so far as to tweet that “We need more consultations and transparency bringing our transatlantic allies on board. A good, balanced deal is better than a premature-one.” Some Italian officials complained about the involvement of France, while other MSs, like Italy were neglected. (And with Italy being among the four biggest export and import partners of China within the EU, it’s hard to explain.)

MEP Reinhard Bütikofer was one of the firsts to call it a “strategic mistake”, with others like Guy Verhofstadt and Raphael Glucksmann, quickly joining in. The latter are questioning the ethics of accepting a pact like that, in the same time when Beijing is intensifying its efforts to crack down on dissidents in Xinjiang or Hong Kong. Others draw attention to the fact that the agreement might not be consistent with the EU’s designation of China as a systemic rival. Or that China has already fallen behind with its commitments to its phase one trade deal with the US and chances are high that the same will happen with the CAI.

The Commission, on the other hand, argued that the CAI is not the tool to handle these issues, it cannot be used “as a leverage on human rights concerns”, since China’s interior politics cannot be changed so simply. If something, the recent tit for tat between Australia and China proves this. Canberra signed the Regional Comprehensive Economic Partnership agreement with Beijing to regulate investments, but also hoping that commerce with China would bring China into rules-based systems. And now the two countries are fighting over beef, lamb, lobsters, wines and 5G, among others.

So why the deal should be accepted after all?

First, the CAI is limited in its scope. Secondly, there’s nothing in it that would prevent European countries or, for that matter, the EU itself, to screen investments and/or to protect critical infrastructure. And exactly because it doesn’t cover political questions, it doesn’t hinder European or coordinated Transatlantic efforts to address human rights issues, democracy, rule of law or, for that matter, other inequalities in trade, like pricing policies, or labor dumping, either.

On the other hand, it could be the start of a process, in which European investments get more secure and their future might get more predictable in China, while Beijing can enter the EU market under similar conditions, given that the deal does contain quite a few such provisions, particularly on market access and level playing field.

The devil will be in the details and the implementation, like whether that playing field will be really equal both on bilateral (EU-China) or intra-EU level, protecting the interests of the EU as a whole and of every member state as well, and not just Germany and France, the two countries attending the last round of the negotiations. Or whether the deal will really give Brussels the leverage it hopes for against China.

But that we won’t see for another year or so.