In need of a Rumpelstiltskin for Ukraine 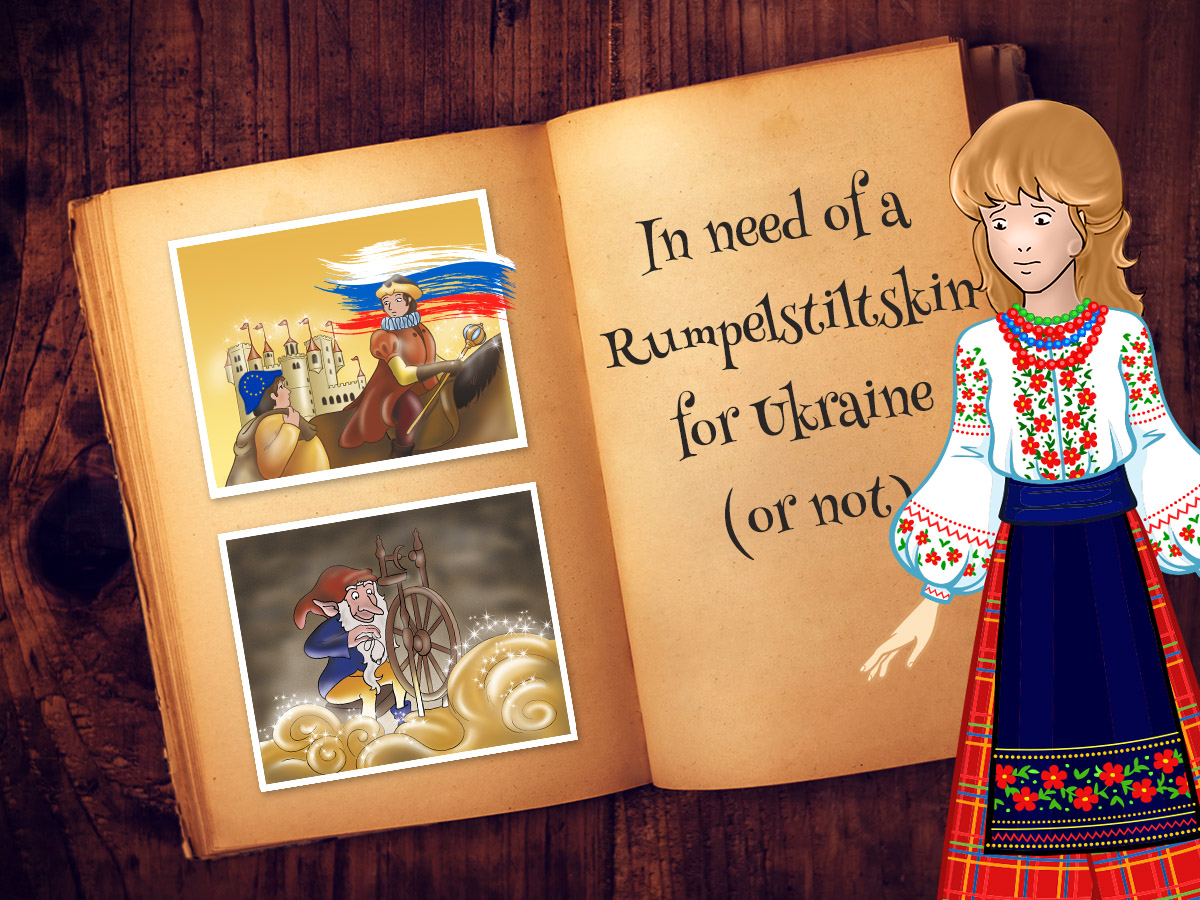 The fairy tales collected by the Brothers Grimm are full of wisdom. The original versions, not necessarily the syrupy-romantic, modern Disney interpretations.

The very old tale of Rumpelstiltskin is one of those.

It is more than old. It is ancient. Some estimate that the storyline itself is more than 4000 years old (that means it’s about as old as the Bible or the Gilgamesh) and it has so deep meaning that various versions of it are found all over the world. He is Gilitrutt in Iceland, Martinko in Slovakia, Repelsteeltje in the Netherlands or Whuppity Stoorie in Scotland. But there is a similar story in Japan and India, as well.

It fits into the line of tales about the importance of promises and the consequences of breaking those. (Think Little Red Riding Hood, who promised to stay on the path; Snow White, who promised not to open the door to strangers or the Frog Prince, in which the princess promised to kiss the frog in return for her golden ball.) It is also a powerful reminder about the perils of showing ourselves bigger or more able than we are for real.

The story (for those who are unfamiliar with it) is about a miller, his daughter, a king (none of them have names) and a goblin, whose name is a mystery almost until the very end.

It has many similarities to the current reality of Ukraine. Let’s look at those characters a little more closely, to understand this.

He’s bragging. A lot. About what his beautiful daughter can do. In the story, he claims that his daughter can spin gold from straw. A very handy ability, even a miracle, who wouldn’t want to have her?

He brags, because he wants to prove to the king that he (not the daughter, but he himself) is an important person. (Of course, any reasonable person would question the story on the spot: if she has such an ability, why is the miller still only a miller?)

The man is pretty much like our modern time “miller”, the EU (and the US, and the NATO); which promised lots of things, wanting to prove its status as an important international player. Democracy. Economic development. Protection, territorial integrity and inviolability of the borders. EU and NATO accession in the long run.

In total disregard of the daughter’s (Ukraine’s) possibilities or abilities.

Because, let’s face it, just like the daughter in the story, Ukraine is (was) unable to deliver any of those things, definitely not on its own. It is still a country ruled by oligarchs, with a giant democratic deficit and a struggling economy, with several issues concerning human rights or the rights of ethnic or religious minorities. Former president Poroshenko’s visit to Brussels a few weeks ago and his claims about being targeted by a criminal procedure for political reasons … well it didn’t paint an exactly nice picture of the country.

In comes the king.

He, just like the modern-day version (Russia) demands proof of the miller’s claims, otherwise, the daughter shall die. More likely than not, he, at the bare minimum, suspects that the miller is lying. He admits that she’s beautiful, still, he decides to test the daughter, in fact, he does it three times, giving her bigger and seemingly less and less possible tasks every time as he is more and more overcome by his own greed.

Before the third test, he promises to marry her, would she succeed, because even if she’s only the daughter of a miller, she can produce unlimited riches. Normally, in a fairy tale, kings and princes tend to fall in love and marry the poor girls for their beauty or kindness, but not here: the king wants to marry the daughter for his own gains. Nothing else.

She doesn’t have much power or ownership over her own fate. Without some deus ex machina event, she’d surely die, because, of course, her father cannot do anything, neither is he willing to admit the lie; the king would surely not let her go and she is not a witch, either.

Making those promises (threats), both the miller and the king maneuvered themselves into a situation, from which neither can back out without sacrificing a lot, at the bare minimum, losing face. (Though I’m not a great fan of historical analogies, the situation was very similar in 1913-14 when the great powers of Europe marched into the first world war; making threats and promises they couldn’t back out from.)

Lesson Nr. 1. The whole situation could have been avoided, had the miller kept his mouth shut. The king didn’t want anything from him in the beginning and we can probably assume that the daughter hadn’t dreamt about becoming a queen, either.

Lesson Nr. 2. Nobody is a saint in the story. The miller is a liar and a coward, putting the burden on his daughter. Hadn’t the king felt the need to prove his own power, he could have simply kicked the miller out, laughing at his pitiful efforts. No, he needed to show that no one could play with him, try to trick him.

The end inevitably seemed a lose-lose situation for all involved.

The miller would lose his daughter, the king would have to sentence an innocent being to death, something that would definitely damage his reputation (and he still would not have gold).

The biggest loser would be the girl, no questions; despite literally having been dragged into the situation between the two other people. She could, in theory, tell the king, that her father lied, but she’d surely lose him and still would be at the mercy of the king and likely face death.

In the fairy tale, the daughter is saved by a goblin. A deformed elf-like creature.

First, he demands a necklace, then a ring and, for the third time, the yet unborn child of the future queen. Not having other options, the girl agrees to it. Each and every time, the offer seems better than the alternative (a.k.a. death).

Lesson Nr. 2 applies for him, too. Surely, the imp (or goblin or manikin in other versions of the story) isn’t a saint, either, making use of the desperate situation of the daughter.

When the time comes, though, she’d rather not give her child to the creature. She manages to cut yet another deal. Would she be able to guess the imp’s name, she could keep her child.

In the fairy tale, she’s lucky.

On the very last night, she (or a messenger sent by her) ventures into the forest in her deep despair and overhears the creature, singing, Today I’ll bake, tomorrow I’ll brew, the next I’ll fetch the queen’s new child; Still no one knows it just the same, That Rumpelstiltskin is my name.

Name revealed and plans foiled, Rumpelstiltskin dies, well, tears himself into two (in some versions, he simply runs away angrily, never to return) and the others live happily ever after. Well, at least if one can consider being married to someone who doesn’t love you, only your ability to make gold a happy ending. Especially since she cannot do it any more without Rumpelstiltskin.

The other option, somehow surviving and going back to her father also isn’t much better: chances are high that the father would betray her again on the next possible occasion and use her as a bargaining chip in another power-game.

The EU/NATO-miller is unable and/or unwilling to really and truly help the daughter to pass the king’s tests, let it be about the annexation of the Crimean Peninsula, the low-key conflict brewing in East-Ukraine or gas deliveries. King-Russia is testing the daughter and the miller at the same time. Even if it is obvious that the things the EU/NATO-miller promised (like membership) are, not technically lies, but aren’t real options either, at least a couple of members would veto any such step.

In fact, with the ongoing weapon-deliveries and troop-positionings, both the miller and the king are only raising the bets.

As of now, the story is not in the end phase. No, it is still in the beginning.

Ukraine seems to be still in dire need of her Rumpelstiltskin, to help it out from the situation she was pushed into.

In the fairy tale, it’s not clear, why the creature helps the daughter/queen, or why he agrees to the last deal. It can pass through closed doors, it can make gold from straw, so more likely than not, it is not after money. Most likely power or influence. Over the king, maybe? Having his firstborn at his mercy?

The identity of the real-world goblin or the price of the help is yet to be seen.

Turkey seems to be playing some version of Rumpelstiltskin, helping the daughter against the king. Despite being a NATO member, it has been at odds with many other members in the past and is (to some extent) an ally to Moscow (and a rival, in other contexts), for example though it condemned the invasion of Crimea, but did not join the US-led sanctions against Russia.

Just like the baby of the story, Ukraine could be a bargaining chip in their “competitive cooperation” for regional power. Ankara has tried (for centuries, in fact), to maintain close contacts with Kyiv and Moldova, trying to use those countries to prevent Russian expansion.

Would a Russian invasion happen, Turkey would likely find itself in a “torn-into-two” situation, both being under pressure from the NATO (to keep supplying Ukraine with weapons) and Russia (that could cause some difficulties for Ankara in Syria, for example).

Of course, real life and great power conflicts are not fairy tales, still the lessons could maybe learned.