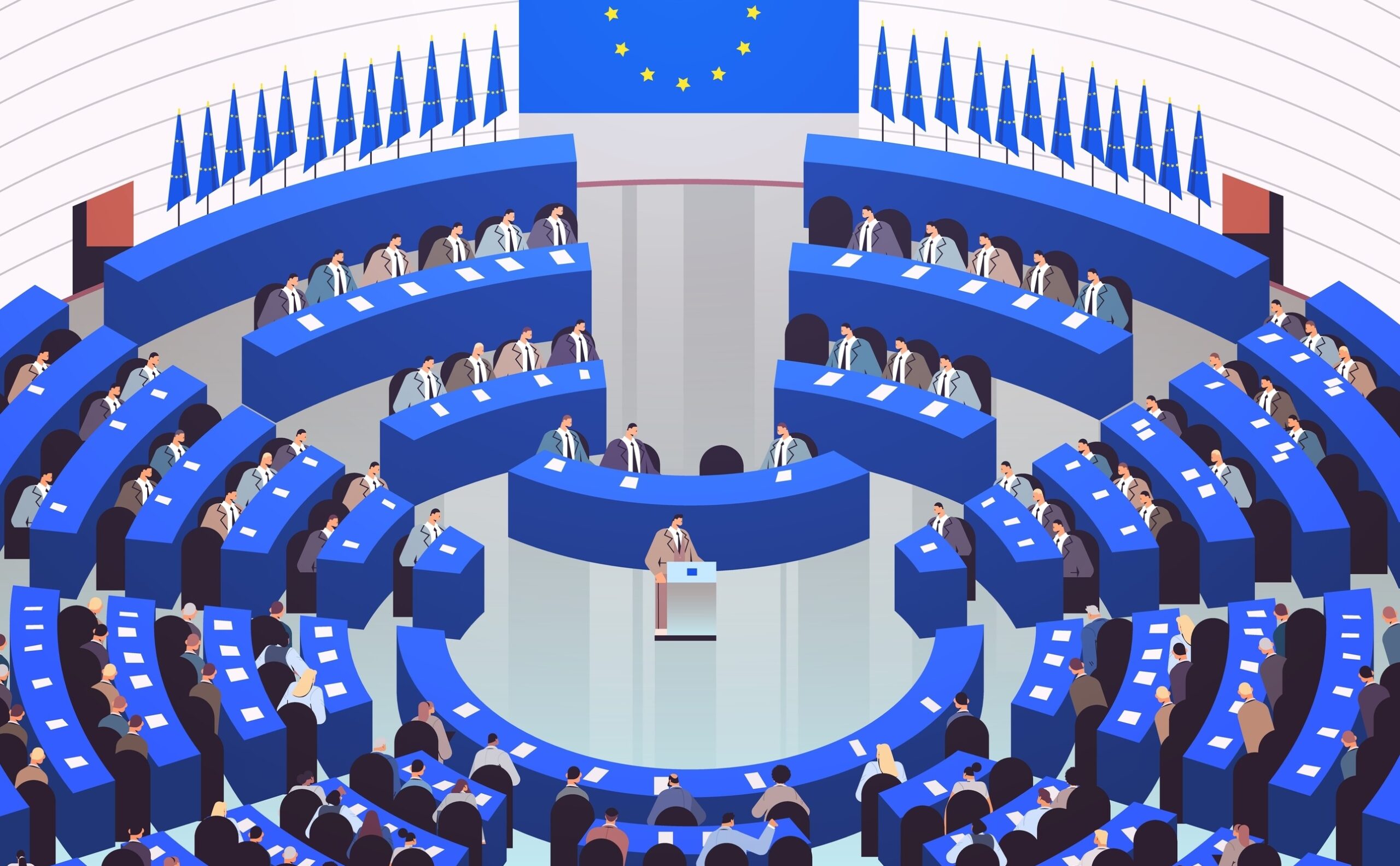 Just as it was expected, there was nothing particularly ground-shaking in the fifty-something minute long address of European Commission President Ursula von der Leyen. A speech that was heavily focused on Ukraine, and not only because von der Leyen decided to wear the colors of the Ukrainian flag as the sign of her solidarity.

There were a few surprise elements, things that got slightly more emphasis than could have been guessed (like Chinese influence on academic research or the focus on strengthening mental health support), but most of what she said fit into the pattern of the past few months. Just as we predicted, “solidarity” featured very high on the list of frequently used words within the SOTEU address, mainly in the context of Ukraine, even if the “winner” was “European” (that got used 21 times, if one is to believe to Politico).

The reactions during the debate weren’t that much surprising, either.

Her calls for a European Convention were greeted with enthusiasm.

Her remarks on Ukraine also elicited almost unanimous support. But, in the same time, drew criticism from Russia-hawks in Eastern Europe, who claim that more sanctions are needed and the bloc should do more to support Ukraine. (The speech comes in a time when officials still couldn’t finalize the previously promised €9 billion aid package for Ukraine.)

Of course, there were some (like Ska Keller, the co-president of the Greens) who welcomed much of what von der Leyen said about renewable energies and going green, yet, in the same sentence, they blamed the Commission for not doing enough, not helping those who are in the greatest need of assistance; also declaring that no money should be given to Poland and Hungary. A remark with considerable irony as the two are among the EU members with high percentages of the population living in “energy poverty” and belonging to those who are in need of assistance.

The Left’s Manon Aubry criticized the slow progress of reforms, the “super-profits of large multinational companies”, accusing the Commission of being in a “broken software” and “immediately going back to business as usual” instead of learning the lessons from the past.

Others, like EPP’s Manfred Weber drew the Commission’s (and the EU’s) attention to the need of severing the ties, but at least lessening the dependence on autocratic regimes like China or Russia and urging everybody to focus more on democracies like Canada; while at the same time, demanded a complete moratorium on new legislation, claiming that “the EU is burdening companies” with too many rules and should let the businesses, especially the SMEs, “do their work without burdening them”.

Weber, though he supported the idea of the windfall tax, he also warned that the Commission’s proposal to recover €140 billion from energy companies’ excess revenues could be seen as a “democratic problem” and might lack legal basis without the European Parliament’s approval.

Similarly, many, like Ernest Urtasun (Greens) were not satisfied with the Commission’s approach to rule of law, what, in their views, got less attention from Ursula von der Leyen than it should have. The MEP also proceeded to actually name and blame two countries, in contrast to the Commission President, who intentionally refrained from going farther than diplomatically worded warnings, promising to keep “insisting on judicial independence” and vowing to “protect our budget through the conditionality mechanism”.

The few most important takeaways that could be deducted from Ursula von der Leyen’s 2022 State of the European Union address, delivered in English, French and German, are as follows.

0) As a general takeaway, it can be established that Ursula von der Leyen spoke about a lot and promised even more. Alas, most of the proposals presented by the Commission will take a long time to materialize, even more to start to have serious impact on the Continent. Not to mention that there are some that will require the agreement of all or most member states.

Her promise to the Western Balkans (that Europe was not complete without them) sounds rather vague and imaginary in light of the past, as there wasn’t much change in the fierce resistance against EU enlargement in some Member States. Even more so, as, just like she also pointed out, “a larger EU would inevitably require profound internal reform”.

Ukraine is a test for the EU, but also serves (or should serve) as a blueprint for tackling issues faced by the EU, like migration.

Ukraine will get the solidarity of the bloc, that means sanctions against Russia are here to stay (“are unshakable” and “this is the time for resolve not appeasement”).

She presented a wide-range of additional help to Ukraine, but new weapons were notably absent from the list. A thing dully noted by Manfed Weber who demanded a substantial increase in deliveries.

2) Some rules can be approached more flexibly, others are set in stone

Without going into too much detail, Ursula von der Leyen gave us some insights into the future of the fiscal rules of the bloc, more closely the Stability and Growth Pact, the reform of which has been on the table for a while. Without success as the issue has been a source of conflict between the Member States, especially those in the East and the South and the so-called Frugal Four.

But while high debt might be a “new reality” and the EU needed “fiscal rules that allow for strategic investment”. The Commission is expected to present its first reform proposal in October, a sure sign for a hot month.

Not all rules will be treated with the same flexibility, though. The proposed “Defense of Democracy” package is aimed against “shady funding” to “Trojan Horses”, coming from “foreign autocrats” who “spread disinformation” and “toxic lies”.

Crimes of corruption will be also added to the EU’s human rights sanctions regime and every member state is expected to strengthen their democracies and “eradicate corruption at home”. Ursula von der Leyen also said that payments will continue to be linked to the rule of law.

Proving that the Parliament was far from united in the topic, Raffaele Fitto (Chair of European Conservatives and Reformists) warned that “we need to be conscious that unity cannot be achieved by seeking conflict. It has to be true and substantial. The rule of law is important, but the debate cannot be contaminated by ideological issues”.

This was a recurring element, and it made appearance in many contexts, woven into very different topics, starting from decoupling from Russia and decoupling the dominant influence of gas on the price of electricity; and ending with investing even more into alternative energy resources (“homegrown” and “self-reliant”), the reform of the EU energy markets, the plans for a new European Hydrogen Bank and alike.

It could be considered a clear shift of opinion that the Commission called for deep reforms of the energy market, especially what considers electricity, on which field many had for long demanded a change of the merit order. Von der Leyen acknowledged that “the current electricity market is not fit for purpose anymore.”

But again, she was notably silent on the idea of a general price cap on all gas imports, an issue that does not have the support of all the members.

Later, during the debate section, Ursula von der Leyen admitted that energy bills had become “unbearable”, but insisted on that the issue was Russia’s fault and the bills belonged to Moscow.

Hitting the ball back to the Parliament’s (and the European Council’s) court, she urged MEPs to adopt the RePowerEU package as soon as possible, as it would deliver massive investments for renewables and cross-border projects.

Then, a few hours after her speech, a set of proposals was revealed. Frans Timmermans said on that occasion, that “countries will have a concrete proposal on the table to reform power markets in the early months of next year”.

All in all, though her speech might have been aimed as a battle call to save democracy in the times when it’s “autocracy against democracy”, in the end it became mostly business as usual, Commission and Parliament fighting over authority.