Protecting the rule of law – the right way II. 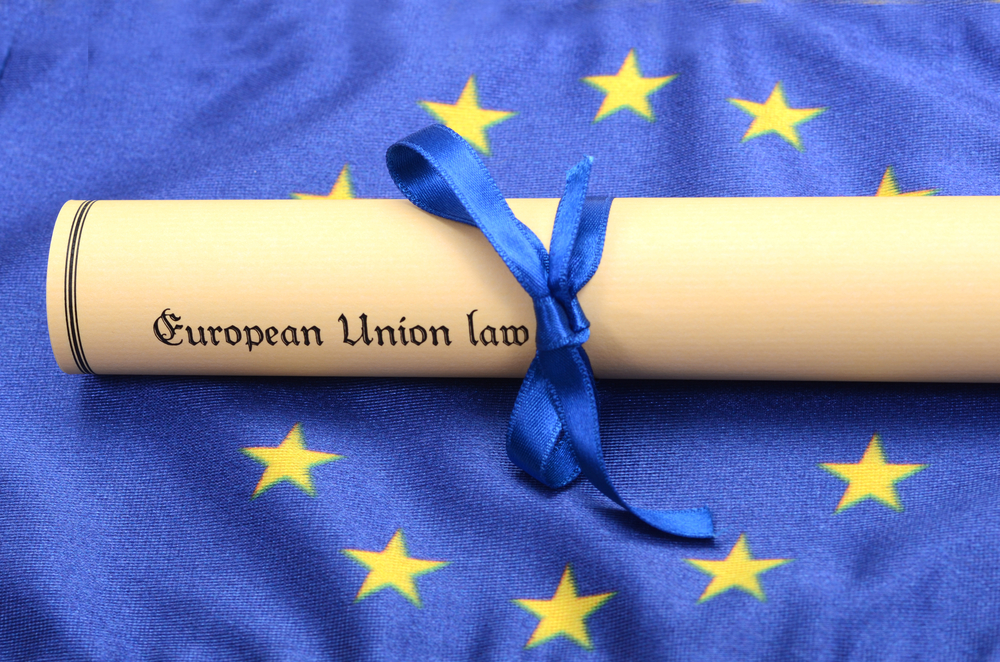 Protecting rule of law in the EU: The current legal framework

Rule of law, defined by the EU

Taking a look at the legal system of the EU, this article tries to determine whether there is a legally binding definition on rule of law.

The EU institutions use Article 2 of the Treaty on European Union (TEU) as a starting point: “the Union is founded on the values of respect for human dignity, freedom, democracy, equality, the rule of law and respect for human rights, including the rights of persons belonging to minorities”. These values are common to the Member States in a society in which pluralism, non-discrimination, tolerance, justice, solidarity and equality between women and men prevail.

Thus, Article 2 establishes rule of law as one of the essential values upon which the EU is based, but doesn’t give a definition to it.

Article 21 states the the EU’s external action is guided by the principle of the rule of law, also without actually defining rule of law.

Secondary law (first, unilateral acts, like regulations, directives, decisions or atypical acts, such as white and green papers, and secondly, conventions and agreements)

Various secondary legal sources refer to rule of law, but none of them provides a definition for it.

Furthermore, the EU uses the case law of the ECJ and of the European Court of Human Rights, and guidance from the Council of Europe (in particular the work of its Venice Commission on democracy through law), to give the concept of rule of law a more precise meaning in the European context. This is the most sensitive part, but in fact, many of the fundamental decisions of ECJ were based on these underlying, “universally accepted principles” in the early days of the Union when it had to implement rules in various areas that are not mentioned in the treaties or other legislation (like the famous Cassis de Dijon ruling). The European Court of Justice has many times reaffirmed that the rule of law is essential for the functioning of the EU (Case C-64/16, Associacao Sindical dos Juizes Portugueses v Tribunal de Contas, Case C-619/18 Commission v Poland)

The problem is that, though it is a rich and interesting literature, but – as you could see in Part I of this article – not unanimous itself.

Quoting Viviane Reding, former Commissioner for Justice, “the rule of law means a system in which no one – no government, no public official, no dominant company – is above the law; it means equality before the law”. The Commission – based on Article 2 – further stated in its documents (e.g. in its 2014 rule of law framework), that “the rule of law requires that all public powers act within the constraints set out by law, in accordance with values of democracy and fundamental rights, and under the control of independent and impartial courts. It requires, in particular, that the principles of legality, legal certainty, prohibition of arbitrariness of the executive powers, separation of powers and effective judicial protection by independent courts are respected.

The 3.4.2019 Communication from the Commission to the European Parliament, the European Council and the Council provides even more detail: “The rule of law is enshrined in Article 2 of the Treaty on European Union as one of the founding values of the Union. Under the rule of law, all public powers always act within the constraints set out by law, in accordance with the values of democracy and fundamental rights, and under the control of independent and impartial courts. The rule of law includes, among others, principles such as legality, implying a transparent, accountable, democratic and pluralistic process for enacting laws, legal certainty, prohibiting the arbitrary exercise of executive power, effective judicial protection by independent and impartial courts, effective judicial review, including respect for human rights, separation of powers and equality before the law. The Commission also states that these principles have been recognized by the European Court of Justice and the European Court of Human Rights.”

In the very same document the Commission states that all the existing (and proposed) instruments to safeguard rule of law rest on a common understanding of what is meant by the rule of law, what its key features are and where deficiencies may arise.

The problem with Commission Communications is that they are not legally binding, since they are policy documents. The Commission takes the initiative of publishing a Communication when it wishes to set out its own thinking on a topical issue: thus, even if it says that there is a common understanding on what is meant by the rule of law, it is not necessarily true or mandatory.

Parliament’s LIBE Committee, among many others, stated that “Democracy, rule of law and fundamental rights are in a triangular relationship, reinforcing each other and together safeguarding the constitutional core of the Union and its Member States”.

It’d be much straightforward if rule of law would have a definition within the treaties themselves, or if there would be a regulation on it. But since this is not the case, rule of law proceedings are based on a broad definition mostly coming from tertiary (supplementary) legal sources. This gives space to arguments and claims of overstepped authorities.

Existing framework for the protection of the rule of law

The mechanism envisioned in Article 7 begins with a proposal to find a “Clear Risk of Serious Breach” of EU values either by the Commission, the Parliament or one-third of member states. This is then approved by a two-thirds majority in Parliament. The accused country is then called to answer to the Council, which may then issue recommendations and vote by four-fifths to identify a breach.

Article 7.2 states that in the event of a “serious and persistent breach” (i.e. the country does not heed the Council’s guidance) the Commission or one-third of countries, approved by a two-thirds majority in Parliament, calls the country to answer to the European Council again. The European Council must then decide unanimously to proceed to Article 7.3, which states that once the European Council has unanimously decided that the breach is still occurring, the Council then votes by qualified majority to suspend rights of the accused country, including voting rights within the Council, until all duties are fulfilled.

Thus, Article 7 proceedings in fact have two parts: a preventive “arm” (determining a clear risk of a breach of the rule of law) and a corrective „arm” (determining a serious and persistent breach). It is only within the scope of this second „arm” that the article refers to the possibility to applying sanctions to the MS concerned.

One problem with this is that it gives the right to the Parliament to decide whether a proceeding should be initiated based on the findings of the Commission, the Parliament or the member states. And the Parliament is not a judiciary, but a legislative body: it’s decisions are politically motivated, to say the least.

And afterwards, the Council – also not a judiciary body – plays a decisive role in the process, also giving ample space to political influence. Especially since it is left entirely in the Council’s hands to assess and decide whether a member state displays a risk or an actual threat to the rule of law that could put European integration and cooperation in jeopardy. There is no independent evaluation, or any judicial scrutiny of the procedure (with no role attributed to the ECJ regarding Article 7 decisions).

Furthermore, while rule of law (and one of its subprinciples, independent judiciary) is a European value and principle, the actual set up of judicial systems is a matter of national competence and not regulated by EU law. Blatant violations (like allowing the executive power to overrule judicial rulings) are easy to detect, but it is a very complicated legal issue to decide, to what extent rule of law is actually hurt if the national legislation meets the “word of the law”, but not the essence of it.

The inability to initiate Article 7 proceedings or to effectively conduct infringement procedures led the Commission to establish a ‘Framework to strengthen the Rule of Law’ in 2014, used only once, against Poland. This is a mechanism for addressing threats to the rule of law which are of a ‘’systemic nature’’ and as such cannot be effectively addressed by national legal and constitutional checks and balances.

The framework consists of three steps:

The framework seems to be suited better to handle rule of law breaches because of allowing for a more graded response to rule of law threats, engaging governments in a dialogue. The Commission’s ‘name and shame’ approach can also be considered to have some deterrent effect. But since the Commission’s recommendations are not legally binding and there are no hard consequences to force member-states to comply, it is a very weak tool (as the case of Poland proved).

The problem with the above two tools is that both procedures lack independence, impartiality and legal rigour. In one word, it is very easy to politicize the decision making during the process and this can clearly qualify as “doing wrong for the greater good”.

To complicate matters further, the Council’s legal service declared the Commission’s rule of law framework illegal, so the Council started its own rule of law dialogue. But it is even less of a legal nature: member states evaluate their own rule of law practices, and present them to their peers. No one expects them to paint a bad picture of themselves, though.

There is another tool at the Commissions hands now, though.

An alternative to Article 7 proceedings is the infringement procedure, as was also initiated by the Commission in the case of Poland. This also involves the ECJ, ensuring a more legal approach. The procedure allows the Commission (or a Member State) to take a Member State to the ECJ to argue that it is infringing EU law as such. The Court’s ruling in such a case is binding on the Member State concerned, but does not strike down a national law as such. If requested, the Court can order interim measures against a Member State while such a case is pending.

The main difference is that (in theory) this procedure requires the breach (or supposed breach) of an actually existing EU law, and not the „values”. But with this restriction it proved to be extremely useful in the cases concerning Poland. (And might prove useful in the five pending procedures against Hungary.)

In fact, in the Commission v Poland decision, the ECJ confirmed that the requirement of respect for judicial independence is inherent in Article 19 TEU. The Court confirmed that no specific link to a particular EU law is necessary in order to argue that a Member State has infringed the principle of judicial independence. It stated that Article 19 TEU is a free-standing rule of EU law: because EU law depends upon an independent national judiciary for its enforcement.

Other tools or instruments

There are many other tools and instruments that can or could be used in case of actual or suspected breach of the rule of law (e.g. the preliminary ruling procedure, European Semester Cycle, annual EU Justice Scoreboard, OLAF).

Many experts argue, that instead of inventing newer and newer mechanisms, these, already existing and (more) widely accepted tools be used in a more systematic manner when trying to promote rule of law.

Coming up next: Part III – Proposed new mechanisms and tools and their pros and cons